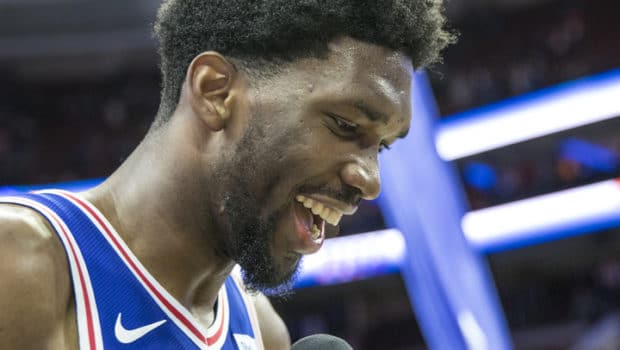 Joel Embiid was making a point last night in front of his mom, who is in town for two weeks to watch her kid play in the NBA.

JoJo spiked Damian Lillard’s layup attempt out of bounds, volleyball style, in the 101-81 victory over the Portland Trail Blazers.

The Sixers scored the game’s first 16 points, led by 13 at halftime and again by 16 early in the third. After Lillard got the Blazers within nine late in the quarter, Embiid answered with a basket, block, slam, jumper — and then the exclamation point. The emphatic rejection caused the frenzied crowd at the packed Wells Fargo Center to erupt.

“It was just a regular block,” said Embiid, who finished with 28 points, 12 rebounds and two blocks.

Portland missed its first 13 shots before Shabazz Napier came off the bench and hit a jumper with 5:01 left in the first quarter. The Blazers never got closer than eight. It was the Blazers’ lowest point total of the season and the fewest that Philly has allowed.

“I would give us an A on defense and like a C-minus on offense,” Sixers coach Brett Brown said. “Turnovers (Philadelphia had 18), at times ratty shots. I thought we could have put them down a little bit earlier.”

“I don’t know if it was anything they did. We couldn’t buy a basket early,” Blazers coach Terry Stotts said.

Lillard finished with 30 points, hitting six 3s, but CJ McCollum had just five on 1-for-14 shooting.

“I think we defended hard. I think it was just another case of us struggling on the offensive end,” Lillard said. “We just weren’t able to put up points.”