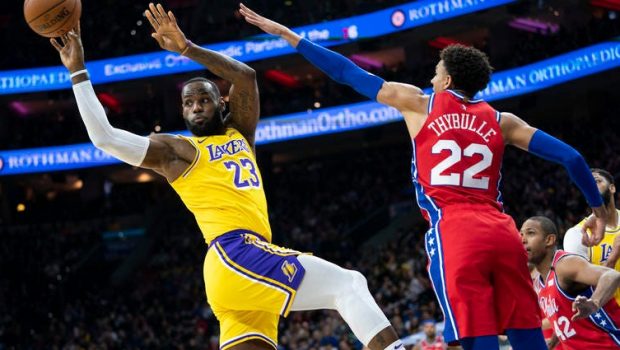 SIXERS POUND LAKERS — JUST 2 GAMES OUT OF 2-SEED IN THE EAST!

There has been an annoying buzz on Philly talk radio lately that insists Ben Simmons is holding back the Sixers and he should be traded.

Or anyone who will take a jump shot.

And last night Simmons showed the fools how wrong they are.

He had 28 points, 10 rebounds, eight assists and four steals to lift the Sixers past the Los Angeles Lakers 108-91 at the Wells.

Simmons shot 12 of 15 in a 41-minute performance that left the Sixers just two games behind the Miami Heat for the No. spot in the Eastern Conference.

Tobias Harris scored 29 points and Al Horford had 16 for the Sixers, who improved to 21-2 at home. Matisse Thybulle also contributed five steals.

The Sixers played without Joel Embiid (finger) for the 16th time this season and were also missing Josh Richardson with a strained hamstring.

Anthony Davis led the Lakers with 31 points while LeBron James had 29 points, eight assists and seven rebounds. James entered the game with 33,626 points and passed Kobe Bryant for third place on the league’s all-time scoring list.

Alex Caruso had six steals for the Lakers, who lost for just the fifth time on the road this season.

Despite being down two starters, the Sixers jumped out to a 59-50 lead at halftime thanks in large part to Harris’ 16 points. The Sixers shot 51 percent from the field, going 21 of 41.

Davis (16) and James (14) scored 30 of the Lakers’ 50 points. The Lakers committed 12 first half turnovers, including an uncharacteristic five by James.

They extended its lead to 68-52 when Simmons found Harris for a wide-open 3-pointer with 9:32 remaining in the third quarter. The Sixers then scored six more and the lead swelled to 22.

James then drove to the basket and scored with 7:23 left in the third, and in the process passed Bryant.

The Lakers made a late push at the end of the third yet still trailed 85-73.

Shake Milton, who made his first career start, scored in the paint with 9:18 to go, giving the Sixers an 89-75 advantage.

Los Angeles closed within 10, 91-81, when James dribbled in from midcourt and threw down a one-handed dunk with 6:57 remaining.

Kentavious Caldwell-Pope soon hit a trey and a jumper to cap an 11-2 run as the Lakers cut the lead to 93-88.

Horford knocked down a jumper from the wing and followed with a 3-pointer to extend the Sixers’ lead back to 10.