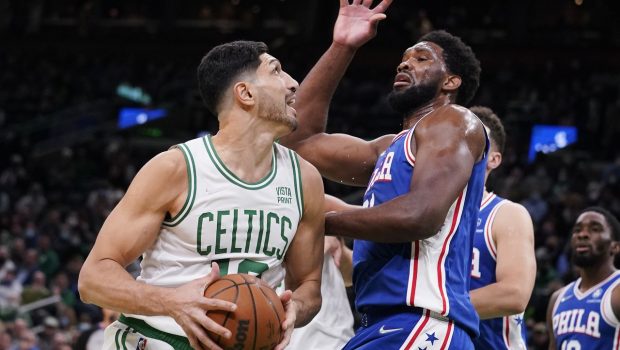 SIXERS PLAY LIKE ENTIRE TEAM IS RECOVERING FROM COVID!

Last night’s Sixers-Celtics game was hyped as a renewal of the grandest rivalry in the 75-year history of the NBA:

Those guys would have been ashamed of the performance Philly and Boston gave at TD Arena.

Jayson Tatum scored 26 points with a career-high 16 rebounds to lead Boston to an 88-87 victory.

The Sixers were so lethargic that it appeared the entire team was recovering from COVID, not just Joel Embiid and Tobias Harris..

Al Horford, who left Boston to sign with the Sixers in 2019 and had the worst season of his career, had 10 points, eight rebounds and five blocked shots. Getting shipped out from Philadelphia to Oklahoma City the following year was “a very low point for me,” he said.

“I was written off. I’m just glad I got another opportunity in a place I want to be,” he said. “There’s a lot of satisfaction being back here and playing at a high level.”

Embiid had 18 rebounds and 13 points. Seth Curry scored 17 points and Shake Milton came off the bench to add 16.

Boston took an 88-84 lead with 38 seconds left when Dennis Schröder drove to the basket. Danny Green answered with a 31-footer from the top of the key to cut the lead to one point.

Schröder again drove, but this time missed everything, and the Sixers got the rebound and called timeout with 6.1 seconds to play. The ball came in to Tobias Harris, who found Niang in the left corner.

But Williams — who missed the previous three games with a non-COVID illness — got a piece of the shot and it fell far short of the rim.