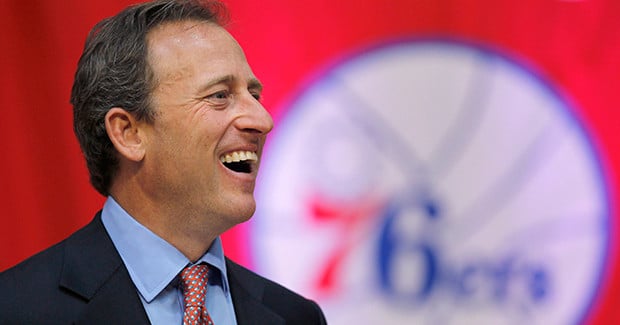 The Sixers continue to make much more news off the court than on.

On Monday, they announced that Hall of Fame NBA exec Jerry Colangelo would become an advisor — a euphemism for Big Boss — to owner Josh Harris (above).

And now Forbes.com is reporting that Harris and co-owner David Blitzer are gunning to own the first NFL team in London.

The two just became major investors in the Crystal Palace Football Club in London and their strategy is simple: According to a business associate of Blitzer, it’s to “get to know the market,’’ as they get a footing in London and see how things operate there for their bid to land an NFL expansion team in London.

The NFL plays regular-season games in London, with the Jacksonville Jaguars using Wembley Stadium as their home away from home. If the NFL expands across the pond, the Jaguars are seen as the leaders to land there. They’ve played games in London since 2013 and recently reached an agreement to play once a season there through 2020.

But Harris and Blitzer are going to try to be the ones to bring the NFL to London and join the Kroenke family (St. Louis Rams, Denver Nuggets), fellow billionaire Paul Allen(Seattle Seahawks, Portland Trail Blazers) and Tom Benson (New Orleans Saints and Pelicans) as owners who dabble in both pro sports. The Kroenkes also own Arsenal FC of the Premier League.

Harris and Blitzer now rank as two of the three top investors in Palace, along with club chairman Steve Parish. The two Americans have much bigger plans.