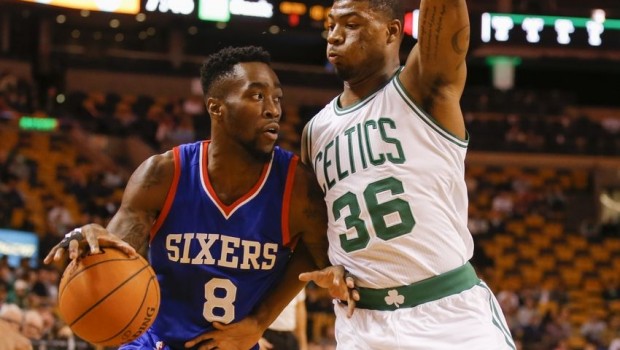 The late comedian’s trademark was, “I don’t get no respect.”

According to Bovada.com, the Las Vegas-based betting site, the Sixers are at that level — and below.

Bovada has set the over/under on number of wins for the Sixers at 15 1/2, which means if you think they will exceed that number you bet over and — you know the rest.

The key for the Sixers would seem to be not letting their 19-win regular season record in 2013-14 fool you.

The Sixers’ midseason sell-off produced a record-tying 26-game losing streak and 18 of those losses came by double digits. For a solid two months down the stretch, this was among the least-competitive teams in NBA history.

Coach Brett Brown opened the summer by declaring that no one would really want to sign with the Sixers. Predictably, tanking-obsessed GM Sam Hinkie made a grand total of zero moves this offseason to change Philly’s direction.

The return of 2013 lottery pick Nerlens Noel from a season-canceling knee injury is the only thing that qualifies as a faint ray of hope. The Sixers figure to take their time with 2014 lottery pick Joel Embiid, who is sidelined with a foot injury, and they used another lottery pick on Dario Saric, who will spend this season overseas. The rest of their roster is composed of cast-offs and vagabonds.

That said, with so many other pathetic outfits in the East’s lower echelons, Philly’s probably doesn’t need to worry about challenging the NBA’s all-time worst records. This line looks smartly set, and I expect the Sixers to finish just under.