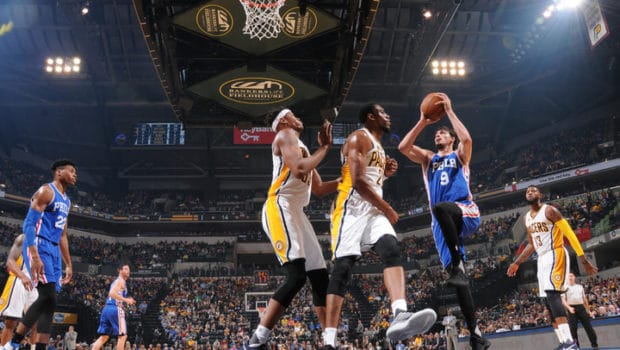 Myles Turner had 17 points and tied a career high with 16 rebounds, Paul George scored 21 points, and the Indiana Pacers beat the Sixers 107-94 last night in Indy.

Indiana (37-36) moved into a tie for fifth place in the Eastern Conference with Atlanta and Milwaukee. The Pacers will play both the Bucks and the Hawks during their final nine games of the regular season.

Jeff Teague added 16 points for the Pacers, who used a 30-point third quarter to turn a six-point halftime lead into a 12-point advantage and snapped a two-game skid.

Al Jefferson finished with 14 points before leaving in the fourth quarter with a sprained ankle. Monta Ellis, Aaron Brooks and CJ Miles all had 10 for Indiana.

“They show why they’re tied for fifth in the East and about to go play on and play in a serious time in the season. I think defensively they were really good. I think that’s where we felt them the most,” Sixers coach Brett Brown said.

Turner came in third in the league with 2.1 blocked shots per game and had two Sunday. The second-year forward had 20 points and four blocks Friday on his birthday, but grabbed just four rebounds in a 125-117 loss to Denver and was disappointed with his play. That might have motivated him Sunday, Pacers coach Nate McMillan said.

“I think Myles was a little upset with how we played in last game. He made an effort to go after (rebounds) tonight,” McMillan said. “The attack was what we wanted.”

The Pacers led by as many as 11 in the first half before the Sixers made a push late to close the deficit to six points by halftime.

George then scored nine points in the third quarter and Teague had eight as the Pacers led by as much as 19 in the period. They extended the advantage to 25 in the fourth.