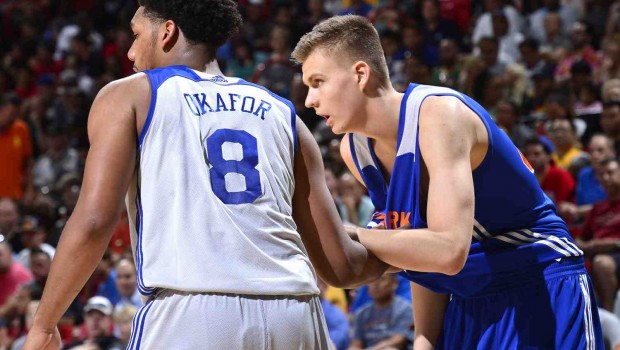 HOW THE SIXERS-OKAFOR RELATIONSHIP TURNED SO TOXIC!

There is so much water under the bridge in the Sixers-Jahlil Okafor relationship that it is useful to remember how we got to this place — with the No. 3 overall pick in the 2015 draft essentially a man without a team.

According to NBA.com’s David Aldridge:

League sources indicate the Chicago Bulls and Atlanta Hawks are the most likely destinations for Okafor. But the Sixers are still holding out for at least a Draft pick, and could still opt to keep Okafor either as insurance against further injury to Embiid, or as a potential expiring contract to aggregate as the trade deadline nears.

There’s so much to unpack in the relationship between Okafor and the 76ers, who took him after Karl-Anthony Towns went to the Minnesota Timberwolves and the Los Angeles Lakers took D’Angelo Russell second. You can start with that Draft night itself.

The Sixers’ instinct that night was not to go for Okafor, but to take a then-teenaged Latvian player who’d played very well in the Spanish ACB League the previous two years.

But the teenager, Kristaps Porzingis (above), refused to even meet with the Sixers, who were still in the throes of their rebuild (“The Process”) and coming off of an 18-64 season. Porzingis’ agent, Andy Miller, also had issues with the team and its then-GM Sam Hinkie. (The team’s current GM, Bryan Colangelo, who’s gotten a lot of the heat locally for how the 76ers have handled the Okafor situation of late, only said last week that the team would not fine Okafor for his comments about wanting out.)

The 76ers could still have taken Porzingis. You don’t have to have face-to-face meetings with a potential Draft pick to take someone. But teams are understandably reluctant to make a potential multi-million dollar investment into someone without having all available information in hand, from personal quirks and dislikes to up-to-date medical reports. So the Sixers passed on “The Unicorn” and took Okafor (Porzingis went to New York with the next pick instead).

The problem for Philly was that it already had invested in its big man of the future, having taken Embiid third in the 2014 Draft. In addition, the Sixers’ first rebuilding move was trading for the rights to center Nerlens Noel in 2013 from the New Orleans Pelicans. And they’d also maneuvered to deal for the rights to power forward Dario Saric (who was originally drafted by the Orlando Magic in 2014), who came over to the NBA last season. That gave Philly three young frontcourt players in which it had specific future plans on its roster before taking Okafor. There wasn’t anywhere for him to play when he got to Philly.

But Okafor has to own some of the dysfunction, too. He was not in shape his rookie season. In separate incidents his rookie season, he was involved in an assault outside a Boston nightclub, and was cited for speeding at 108 miles per hour across the Ben Franklin Bridge by local police. He did not exactly scream “fundamental building block of the future” with his off-court behavior.

And yet, with Embiid still rehabbing from foot surgeries and out for the season, Okafor still averaged 17.5 points and 7 rebounds as a rookie, showing he was worthy offensively of a steady diet of post-ups. Defense was another matter entirely, but let’s get real: individual defense, or the lack thereof, is no longer much of a consideration in today’s NBA. Okafor may be bad defensively, but … compared to whom? The league has made it clear what it values with its all-offense all the time rules changes of the last generation.

Okafor’s days in Philly were numbered when Embiid finally got on the court last season. Any four who plays alongside “The Process” best have some inside-outside to his game, and Okafor has shot exactly six 3-pointers in his first two-plus NBA seasons — and none since that rookie season. Because of that, understandably, Brown gave Saric a ton of minutes toward the end of last season, when Saric make a strong run at Kia Rookie of the Year. Okafor, on the other hand, didn’t play in the Sixers’ last 11 games of 2016-17.

The Sixers were close to a deal last February that would have sent Okafor to Portland. But sources indicated, then and now, that the Blazers changed their plans and went in instead on a deal with Denver that brought them Jusuf Nurkic in exchange for Mason Plumlee. Deals fall through all the time, but this looked especially bad because the 76ers told Okafor to stay home and not go on a road trip with them since they believed a deal was imminent.

This year, the idea was to showcase Okafor during the preseason, and Brown did give him some burn off the bench — but not a ton.

So, where can Philly send him? The Sixers are reluctant to just cut Okafor loose, knowing it will take Celtics boss Danny Ainge about 30 seconds to scarf him up and put him into the injured player exception Boston has for Gordon Hayward. (The two teams haven’t been able to come together on a trade.) Okafor’s knee is sound and he’s in the best shape of his young career.

Some have trotted out the usual suspects: Phoenix and New York and other rebuilding teams. But those teams have their own problems and their own young frontcourt players (Marquese Chriss and Dragan Bender for the Suns; Porzingis and Enes Kanter with the Knicks) who’ll need all the minutes they can get to further develop. That is also, it says here, selling Okafor short — that all he can be is a stats hunter on a bad team.

But the Sixers also don’t want to add any salary to get Okafor off the books. They have every intention of extending forward Robert Covington as soon as they are able — Nov. 15 — and aren’t going past that in new expenditures this season. But teams are asking Philly to take back more salary in exchange for Okafor’s now expiring $4.9 million contract.

And, if it doesn’t work with Chicago or Atlanta, there aren’t a lot of obvious other places the Sixers could send him. A lot of solid and/or promising teams like Charlotte, New Orleans (which had interest in the past in Okafor) and Detroit are over the cap and perilously close to the tax threshold, and no one is going to go over it to take a chance that Okafor might be better than he showed in Philly. And good teams already paying the tax this season are obviously not in the mix.

Jahlil Okafor will get a shot, somewhere, to play again. But he may have to wait, yet again.