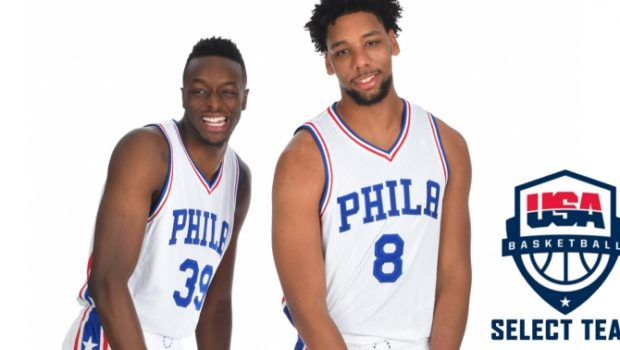 Sixers center Jahlil Okafor and forward Jerami Grant are among 25 players that have been chosen for the 2016 USA men’s select team that will train July 18-21 with the 2016 USA Basketball Men’s National Team during its training camp in Las Vegas.

In May, Okafor was named to the 2015-16 NBA All-Rookie First Team after averaging 18 points, seven rebounds, one assist and one block per game in his debut NBA campaign. The third overall pick in the 2015 NBA Draft, Okafor shot 50.8 percent from the field as he joined Charles Barkley (1984-85) as the only two qualified Sixers rookies ever to connect on at least 50 percent of their field goals.

Grant was selected by the Sixers in the second round (39th overall) of the 2014 NBA Draft following two seasons at Syracuse University. He has totaled 195 blocks in his two NBA seasons, which is the third-highest total generated by a player 6’ 8” or shorter during that timeframe, trailing only Golden State’s Draymond Green (212) and Atlanta’s Paul Millsap (208).

NBA All-Stars such as San Antonio’s LaMarcus Aldridge, Oklahoma City’s Kevin Durant and Russell Westbrook, Indiana’s Paul George and Cleveland’s Kyrie Irving and Kevin Love are among the players that have previously been named to the USA Select Team since its first fielding in 2007.