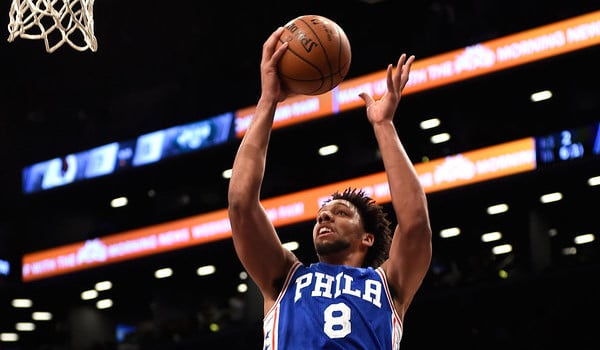 The Nets knocked off the Sixers 92-91 yesterday in Brooklyn, and there were some bright spots for Philly fans:

Jahlil Okafor (above) scored 14 points on 5 for 13 shooting, including 4 for 4 from the foul line with five rebounds. Teaming with power forward Nerlens Noel, Okafor was a presence on the post. He scored three baskets on passes from Noel and registered his lone assist on an alley-oop pass to the power forward on a 2-on-1 fast break in the third quarter.

“That’s what it’s going to be. Jahlil is a great passer and I’m really expecting there to be a lot more of those,” Noel said. “We’re just going to continue to find each other.”

Coach Brett Brown was excited about the alley-oop play that started with point guard T.J. McConnell diving onto the floor for a loose ball and Okafor dribbling in the open court to the foul line before finding Noel.

Noel seemed to benefit the most from Okafor’s return. Free to run the baseline and operate in the open floor, Noel scored a team-high 15 points with 11 rebounds, five assists and six steals in 35 minutes.

It was the most playing time for any Sixers player this preseason. Better yet, Noel and Okafor got to play a lot of minutes side by side.

“We’re getting more and more comfortable,” Noel said. “As time goes on and we play more games, we learn each other’s tendencies — where he likes to be on the court, where I like to get the ball on the court — so I think it’s only going to get better and better.”

That’s Brown’s hope, though he won’t have too many more chances to look at his dynamic duo in the preseason. The Sixers have just a handful of practices and one more exhibition game before the season opens and the games count. So far, Okafor and Noel have played just three games together, not much court time to truly make a difference.

As a result, Brown has been working harder to guide Okafor to his sweet spots, including instances where both big men flash to the high post in the half-court offense. Okafor is a threat from the foul line extended, says Brown, and it also gives Noel a chance to be creative off the ball.

“They’re really good passers,” Brown said. “They’re excellent high-post passers and they’re excellent on catching and going. That was the thing that surprised me the most with Jahlil — he was comfortable at the elbow and he can put the ball on the floor and go by people.”

There’s no way Okafor is going to be able to post up in the low post and take on the big men around the league, Brown said.

“I think it would be a mistake to just throw it in to Jah and let him beast the NBA,” Brown said. “That’s not going to happen. I have to find his honey spot, where he has the most comfort and I think the elbow is one of those spots.”