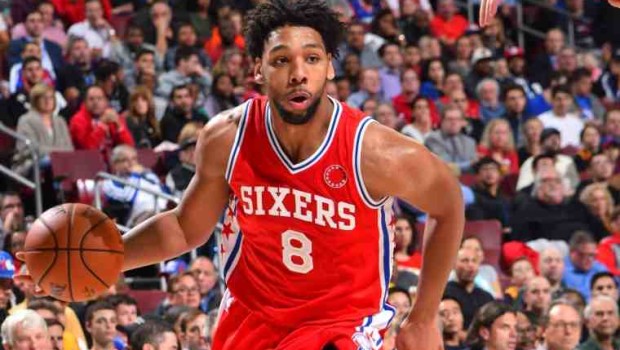 Sixers Jahlil Okafor (above) and Kendall Marshall’s dads made headlines for what they said and tweeted during games, leaving the kids a bit embarrassed.

”We all love our children,” Sixers coach Brett Brown said with a laugh.

Maybe, but these two dads might have expressed it the wrong way.

With guard Marshall’s playing time down to nothing, Dennis Marshall vented Saturday night on Twitter over his son’s decreased role.

”I always said there was racism in sports,” Marshall tweeted on a Twitter account that has since been deleted.

He went on to say, using an expletive, white players are getting more chances even when they aren’t playing well.

Dennis Marshall also took a not-so-veiled shot at struggling Sixers guard Nik Stauskas and his firm spot in the rotation.

”How are you a ‘shooter’ and shooting 27 percent from three?” Marshall tweeted. ”Can’t guard but play a lot. What do you think the reason is?”

Kendall Marshall said before Monday’s game against Minnesota he did not share his father’s opinion.

”That’s not coming out of my mouth. That’s not my social media,” he said. ”He’s a grown man. It was obviously the wrong time and place to say it, but he said it. He’s apologized for it since.”

”I am ashamed and embarrassed by my actions. I have sent a letter of apology to the Sixers,” he wrote.

That was good enough for his son.

”Me and him, we go at it sometimes,” Kendall Marshall said. ”He knows he was wrong. He apologized for it. Coach already told me that he understands it has nothing to do with me. We’re good now.”

Okafor’s father, Chuck, was accused by fans within earshot of him on Twitter of heckling Brown from behind the bench during a loss Saturday at Los Angeles.

”I don’t know why you guys worry about my dad,” Okafor said. ”He’s not in the NBA. He’s not on the team. You can do better than finding something than my dad to write about.”

Okafor, the No. 3 overall pick out of Duke, has been one of the top rookies in the NBA. But his season has been marred by a serious of incidents and he served a two-game suspension last month for his role in a Boston street fight.