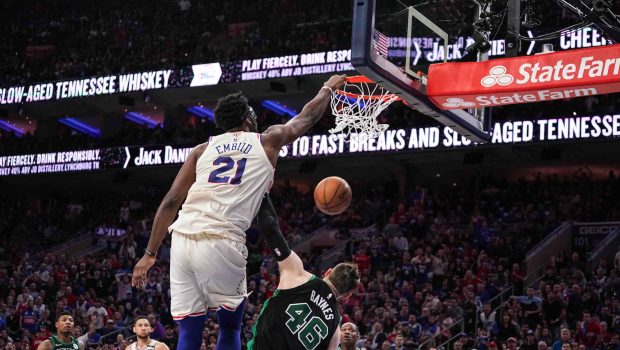 SIXERS’ OFFSEASON, PISSED ON BY LOCAL MEDIA, WAS JUST FINE!

If you read the blogs like Crossing Broad who bay at the moon that the Sixers’ offseason has been a failure because they didn’t sign LeBron James or trade for Kawhi Leonard, you might be surprised that things in Sixersland are just fine, thank you very much.

A combination of the Leonard trade and a quiet off season have banished the Sixers back out of the Eastern Conference title discussion for now.

That’s pretty interesting, given that just three months ago the Sixers were the hottest team in basketball and coming off a decisive playoff series victory of the Miami with Joel Embiid (above) and Benny Simmons leading the way.

The new Conventional Wisdom about the Sixers is that they are Eastern Conference second-raters.

Even the dopes at the Inky have been writing that.

The Sixers are being victimized by the “too many assets” problem that Celtics fans may recognize as familiar.

The Sixers have a young asset and draft war chest that rivals the Celtics own, but that works against you when negotiating to acquire a star player somewhat.

Teams will demand a high price simply because they know you can pay it and the Sixers and Celtics refusal to add Simmons or Jayson Tatum may kill those deals on arrival.

Kawhi Leonard, Jimmy Butler, Kemba Walker, Kevin Love and Khris Middleton will likely all be free agents next year, and Philly has turned itself into an attractive landing spot for a player that wants to win and secure the bag.

If Philly acquires any of these star players in free agency, they will still have ample room for improvement through a young core and several of their own draft picks, still making them the clear rival to the Celtics for years to come in the Eastern Conference.

Barring a big leap from Markelle Fultz, however, the Sixers will be slightly better than last year and finish the 3rd best team in the Eastern Conference.