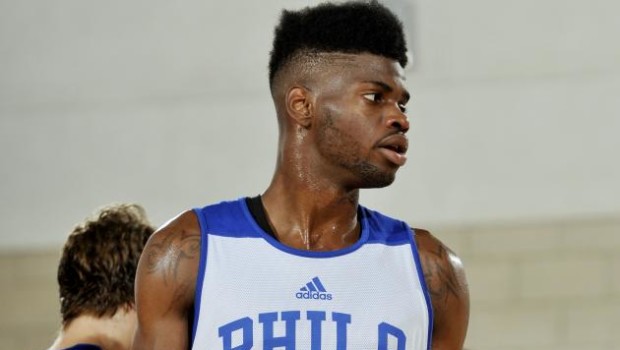 SIXERS’ NOEL THE EARLY LINE FAVE FOR ROOKIE OF THE YEAR

The NBA training camps don’t open until October and the Sixers’ first regular season game is still two and a half months away, but that hasn’t kept NBA.com’s Fran Blinebury from charting Rookie of the Year prospects:

Nerlens Noel, 76ers — While all eyes have been on the big-name talent arriving in the 2014 Draft class, the guy who had originally been projected as the No. 1 pick in 2013 just might take a page out of Blake Griffin‘s delayed gratification book to steal the thunder and the trophy. After being sidelined by an ACL injury, there were times late last season when he was clearly chomping at the bit and openly talking about his desire to get on the court. Yet, the Sixers held firm in resting him all season. When Noel finally got to play in Summer League, he showed his athleticism, his explosiveness and defensive skills. He’s an active big man and with the Sixers’ goal of playing at a fast pace, he’ll get plenty of chances to run the floor and put up numbers. With Philly’s top pick this year, Joel Embiid, likely sidelined for the season, Noel will also get his share of minutes and more. The Sixers waited decades to get their first Rookie of the Year winner last season in Michael Carter-Williams. Now they could make it two in a row.

Jabari Parker, Bucks – There will be questions to answer. Is his long-term future in the league as a small forward? Or does he slide over and use his shooting ability as a stretch four? The general consensus is there could be others in this year’s rookie class with greater potential, but Parker is the one most ready to step into the NBA and thrive, perhaps even star, from Day One. The Bucks franchise certainly needs a fresh face as a headliner as they move to a new era with new ownership and a new coach (Jason Kidd). He wasn’t as flashy as the neon signs in Las Vegas during Summer League, averaging 15 points and eight rebounds. However, Parker has everything in his offensive arsenal — from step-back jumpers to finishing inside — that enable him to be the main gun in the Bucks arsenal. He’s the chalk pick to win ROY.

Marcus Smart, Celtics — Big man Julius Randle is playing for the other rebuilding traditional powerhouse out West and could have his minutes blocked by free-agent signees Carlos Boozer and Ed Davis. Smart, however, will have no such problems getting (and staying) on the floor in Boston. He either learns playing alongside Rajon Rondo or takes his spot if the Celtics do pull the trigger and trade the veteran. Smart’s offense is streaky and he’ll have to learn discipline with his shots. But he’s a defensive bulldog who loves the challenge and is also a willing pupil that will quickly become the pet project of coach Brad Stevens. Smart should be a mainstay in Boston as it moves ahead in its reconstruction process.

Andrew Wiggins, Cavaliers – His chances of latching onto the rookie hardware will improve the minute he gets his wish and the trade from Cleveland to Minnesota goes through. While there may have been less pressure to be a role player alongside LeBron James on the Cavs’ roster, Wiggins will certainly get more chance to shine as the new face of the Timberwolves. There is a lot to learn and improve on. He’s got a questionable handle and really needs to improve his shot, but those are fixable areas. What you can’t teach is a leaping ability that goes through the roof. Plus, there’s his willingness to defend that is not far behind his offense. A big question, though: will the burden of carrying a remade Minnesota team built around him wear him down and make his stats suffer? There is smart money that says Wiggins could one day be the best of the the bunch, but chances are his raw talent alone won’t carry him to the ROY.

Elfrid Payton, Magic – He’s got a jump shot that needs plenty of work, but everything else about his game will make him an instant hit in Orlando. In fact, he could be a dark horse in the rookie race all season long. Payton’s place will be starting at the point, ending the experiment at converting Victor Oladipo. Doing so will allow both young guards to thrive. He had a lot of turnovers in his summer league debut, but also put upplenty of good numbers scoring, passing and rebounding. The rangy playmaker showed a real knack for delivering open teammates the ball, too. Payton has elite-level athleticism, plus a nose — and long arms — for racking up steals. He’ll take his lumps in the learning process. However, a young Magic team will give him all the minutes and opportunity he needs to show that he’s a star in the making.