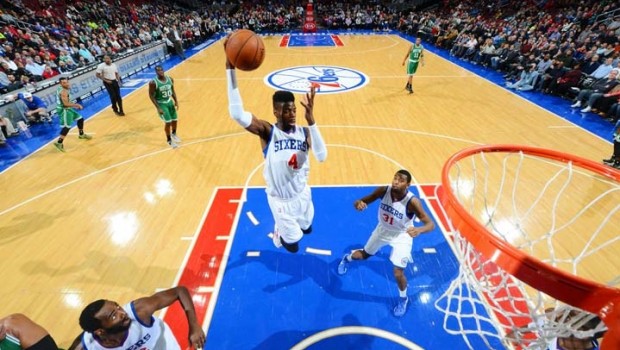 There once was a time when the anticipation of a Sixers-Celtics game meant something, conjuring memories of Wilt vs. Russell, Bird vs. the Doc and, as recently as the spring of 2012 a seven-game playoff series.

The thrill is gone as both teams are at (Sixers) or near (Celtics) the bottom of the NBA.

Kelly Olynyk scored a career-high 30 points, leading the Boston Celtics to a 105-87 victory over the Sixers on Monday night.

Avery Bradley had 15 points, and Brandon Bass and Jeff Green added 14 apiece for Boston (8-14), which snapped a three-game skid.

The Sixers were coming off a late collapse in Saturday’s 120-115 overtime home loss to Memphis when they gave up an 18-point lead with 7:39 left in the fourth quarter.

The Sixers entered averaging a league-low 91.4 points, and they scored just 13 points in the second quarter and entered the break trailing 57-38.

Boston fell into an early hole by missing its first nine field goals before settling in. Olynyk’s 14 points helped Boston go in front 30-25 at the end of the first quarter.

Philly never cut the margin under double-digits after halftime.