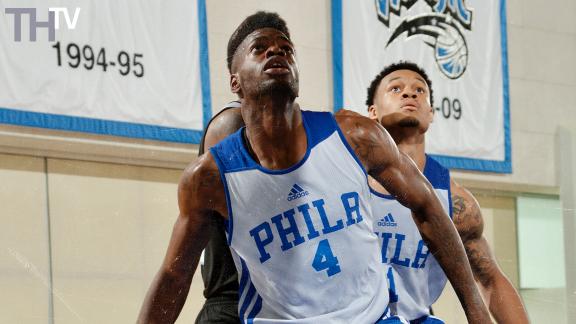 SIXERS’ NOEL MAKING UP FOR LOST TIME IN VEGAS

That doesn’t do his game justice.

His length and leaping ability make him an intimidating force in the paint. The guys on the Sixers bench were counting the number of shots Noel altered and said it got into double digits before they lost track.

“When the guards start being a little more timid on their drives and they start shooting a lot more floaters then I know I’m the reason,” Noel said.

It wasn’t the only thing Noel did well in his Vegas debut. He is hard to keep off the glass. He plays with more physicality than you would expect — he’s thin but will push and not back down (he doesn’t have the base to push around the strongest in the NBA, but he’s not a lightweight either). He chipped in a dozen points.

Still, it was the defense that gets your attention — at one point he sent an Anthony Bennett shot flying with a “Whose you’re No. 1 pick now?” intent.

Call it the “Blake Griffin effect” if you want, but Noel looks like the best player in Las Vegas. He’s a guy Sixers fans — and Michael Carter Williams (his old AAU teammate) — are going to love. Even if there is still plenty of raw there.

“He’s active, he’s all over the place,” Sixers Summer League coach Chad Iske said. “He’s trying to do everything, he’s trying to do too much on both ends. The hard part is do you want to just settle him down or do you want him to play with that aggressiveness? I don’t want to give him too much and cloud him, and then he’s thinking instead of playing. I think we just have to get out there and find the happy balance between him being within our rules and him being himself.”

Noel had been talked about as a likely No. 1 pick in 2013 until he blew out his ACL. Noel fell and became the No. 6 pick of the New Orleans Pelicans but was traded to the Sixers on draft night in 2013. Coming off an ACL surgery, the Sixers sat him for an entire season.

“I was very anxious to get back, even at the end of last season I was itching to get back, I felt great,” Noel said.

“I think he’s so excited to be out there and running around, you see a couple times late he gets a couple cheap fouls because he just impatient to play. But we’re excited about it,” Iske added.

Noel gets his offensive points right now mostly through hustle, although he showed a couple post moves and he knocked down an 18-footer Monday.

But is real impact from Day 1 will be on defense. And shot blocking.

The Sixers are remaining patient — Noel is not playing every game. He played some in Orlando then missed the Sixers first two games in Las Vegas before playing. This is still the log game for Philly.

“We know it’s a whole another level when we get into the regular season, we’re just happy with where he’s at right now,” Iske said. “We know it’s not a sprint, we’re looking over the long haul with him.”

Over the long haul you can picture Noel with Joel Embiid forming a front line for a team with Michael Carter-Williams and maybe Dario Saric and you can see a very good team. One that is a beast defensively.

The Sixers and Noel are trying not to get ahead of themselves. Patience and development remain the watch words. But the Sixers appear to have the best player at Summer League on their team, and he’s just getting started.