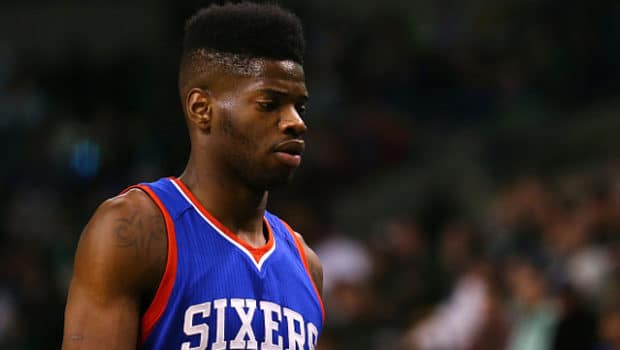 SIXERS’ NOEL, WHO HASN’T PLAYED SINCE APRIL, DEMANDS A TRADE!

You gotta hand it to Sixers center Nerlens Noel.

He hasn’t played since last April because of a minor knee injury, and he has the balls to demand a trade!

During the Sam Hinkie era, the Sixers acquired a whole lot of big men, and that logjam in the front court has quickly worn thin for one player in particular.

Noel hasn’t been shy about voicing his displeasure with the current roster construction, calling the situation “silly,” and according to a recent report from Marc Stein of ESPN.com, making it clear to the organization that he wants out:

Nothing has changed here. Noel has yet to appear in a game this season after electing to undergo arthroscopic knee surgery last month, but word is he’d still prefer to be shipped to a new address with so many big men to battle for playing time in Philly. Count on the Sixers to accommodate him eventually.

With the emergence of Joel Embiid as a two-way force, it’s clear that either Noel or Jahlil Okafor would be expendable in this scenario. The disgruntled Noel has likely made that decision much easier. The only obstacle now is finding a suitable trade partner.

Noel has plenty of value as a defensive presence in the paint, but with the league trending toward more versatile bigs who can stretch the floor on offense, the Sixers may not get as much in return as they’d like.