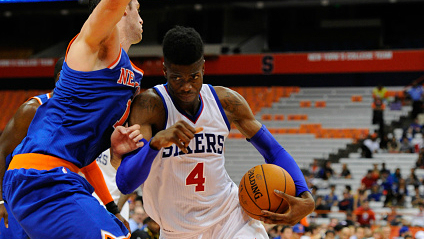 Carmelo Anthony may not be the superstar he thinks he is, but lots of fans in Syracuse came out Tuesday night to welcome him back.

Anthony scored 17 points in a return to his college home, and the New York Knicks beat the Sixers 84-77 in a preseason game on Tuesday night.

Anthony, who led Syracuse to its only national championship in 2003, also had seven rebounds in 27 minutes at the Carrier Dome. He was 5 for 12 from the field and 6 for 8 at the free-throw line.

Two more former Syracuse stars took the night off. Philly was without Michael Carter-Williams, who had right shoulder surgery in May, and rookie Jerami Grant, who was sidelined by an ankle injury.

Tony Wroten and Nerlens Noel (photo above) led the 76ers with 12 points apiece. Noel also had 11 rebounds and four steals.

Jason Smith scored 14 points for the Knicks, who had a 43-36 rebounding edge. Tim Hardaway Jr. had 13 points, and Iman Shumpert finished with 12.

Philly shot 38 percent from the field, including a 2-for-18 performance from 3-point range.