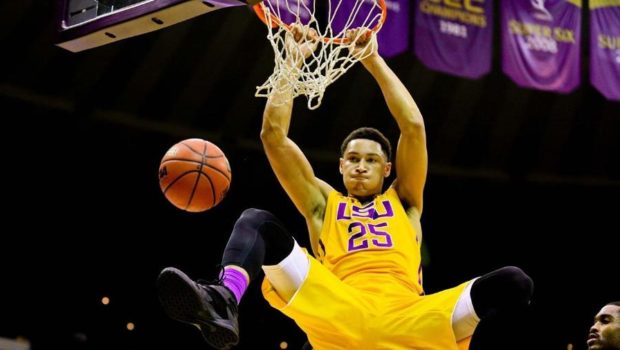 The NBA draft is only 18 days away — June 23 — and the debate about who the Sixers will take with the first overall pick will be settled then.

However, it does feel like momentum is definitely on the side of LSU’s Ben Simmons.

ESPN draft expert Chad Ford is definitely on board. He attended a workout featuring Simmons on Wednesday, and appeared on 97.5 the Fanatic to discuss the young Australian’s progress:

“He’s been working out for two months […] His body looks great, he’s put on about 20 pounds since he has been in there…the thing I walked away most impressed with was how he is approaching the process itself. Very focused, very detailed, this is his life 24/7 now […] I think when it gets to Summer League you are going to see an improved Ben Simmons ”

Much of the discussion has revolved around whether or not Simmons has the correct mentality to become a star in the NBA. However, based on what Ford saw that doesn’t appear to be a concern. Ford also noted that Simmons’ jumper looked much improved and while he isn’t on the level on Brandon Ingram as far as shooting goes, his jump shot is far from broken.

In any case, Ford made it clear that Simmons is the runaway favorite to be the top overall pick:

“I don’t think the Sixers were leaning Ingram…if the draft were today, it would be Simmons, and it would be in a landslide.”