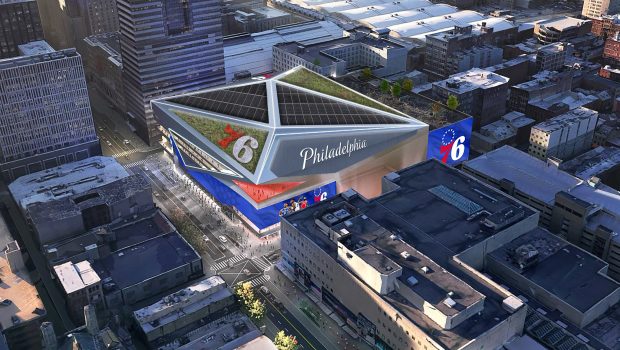 SIXERS ARENA SLAM DUNK FOR CITY: SOMEONE SHOULD TELL THE INKY!

The Sixers new arena is such a slam dunk great idea for the city, the region, the Sixers and the NBA that it’s amazing that only a few loons on talk radio and the Inky are still in doubt.

The Sixers announced yesterday the creation of a new development company, 76 Devcorp, that will work toward building a new arena — tentatively named 76 Place — for the team in Center City. The company will be led by Philadelphia-based businessman David Adelman.

“The Philadelphia 76ers’ extensive evaluation of potential sites for an arena over the past two years culminates today with plans to pursue the Fashion District Philadelphia site as the proposed new home of the team,” said Adelman.

The project will be entirely privately funded and carry a cost of $1.3 billion.

The team anticipates providing $1.9 billion in economic output during construction and $400 million annually once the arena opens.

If construction goes according to plan, the new arena will be ready in time for the start of the 2031-32 NBA season.

The 76ers didn’t mention if they would share the arena with the Flyers — the two teams have cohabitated since 1967.