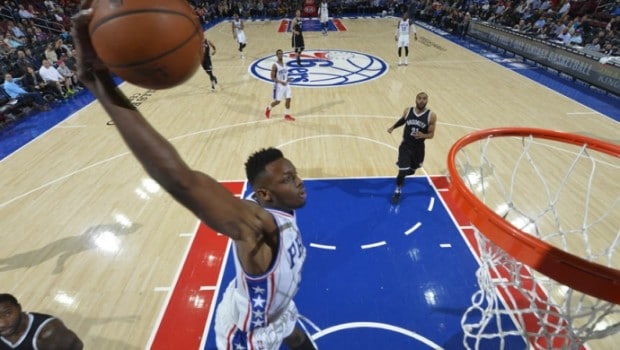 SIXERS-NETS TONIGHT: A RACE TO THE BOTTOM OF THE NBA

The Sixers’ pitiful season is entering its last month, and it’s come to this:

Looking to avoid a ninth straight road defeat, the 76ers can take the season series from the Nets for the first time in five years tonight.

The 76ers are 3-38 against the East with the other victory being their most recent road win, against Orlando on Jan. 20. They last took a season series from the Nets with a sweep in 2010-11.

To do it again, the Sixers must bounce back after allowing Detroit to shoot 53.8 percent in Saturday’s 125-111 loss. Isaiah Canaan scored 22 and Carl Landry added 18 but the 76ers were outscored 35-24 in the fourth quarter.

Landry has totaled 34 points on 14-of-22 shooting in two games after being held to fewer than 10 in three of the previous four.

Sixers forward Robert Covington is expected to miss a second straight contest after he was taken off the court on a stretcher following an accidental kick to the face by teammate Jerami Grant on Friday.

“It definitely scared me more than anything,” Covington said. “But I’m glad to be alright, and I let everyone else know that I’m OK, and I’ll be back soon.”