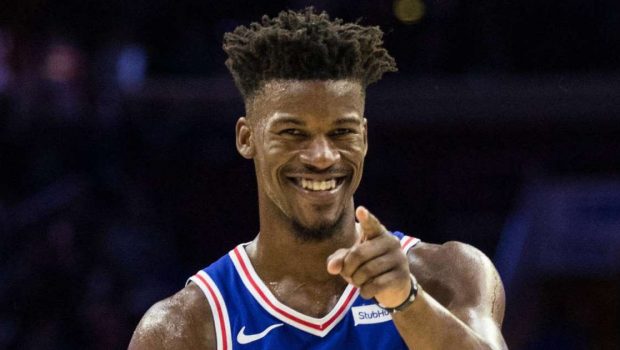 SIXERS MOVING TO LOCK IN JIMMY BUTLER FOR THE FUTURE!

As the Sixers get down to business tonight in Toronto, they are also planning for the future.

Shams Charania of The Athletic and Stadium reported Jimmy Butler’s rep met with Sixers general manager Elton Brand to discuss his potential long-term future in Philly. The report says Butler still has interest in potentially playing in Los Angeles but is focused on winning with the Sixers for now.

“We know how important every single day is and we know what we’re expected to do,” Butler told Charania. “We’re expected to win and perform at a very high clip — just like these other teams out East. We know why we were brought together. But we can’t skip over no games and skip over no days.”

Butler averaged 18.2 points, 5.3 rebounds and 4.0 assists in 55 games with the Sixers after coming over in a November trade. He was relatively quiet on the offensive end in Philly’s first-round win over the Brooklyn Nets but brought a constant on-floor intensity, most notably in a scrap with Jared Dudley.

Butler was far from the only major piece brought in during the season. The Sixers also traded for Tobias Harris, Boban Marjanovic and Mike Scott at the deadline, and the team’s constant state of flux has forced them all to bond in a short period.

“From the beginning of the year to when I got here, to Tobias, Bobi (Boban Marjanovic) and Mike (Scott) coming … it’s a major change,” Butler said. “We’re trying to figure each other out, talking it out, studying on film every day.

The Sixers traded for Butler and Harris with designs on keeping them beyond this season; they wouldn’t have moved pieces like Dario Saric, Landry Shamet, Robert Covington and draft picks if that wasn’t the long-term goal. Butler has made no commitments to staying, and a frustrating second-round flameout could alter his decision, but the Sixers can offer the most money and give him a chance to play deep into the postseason every year.