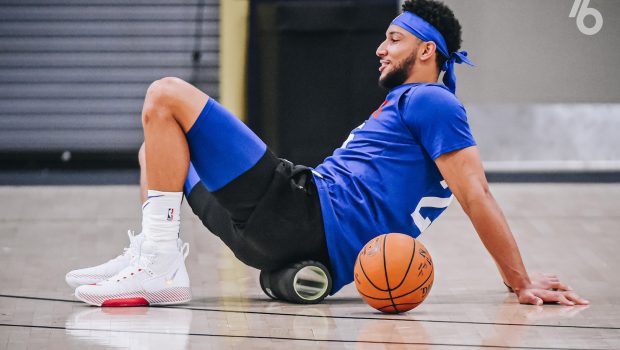 SIXERS MOVE BEN TO THE 4, SHAKE TO 1: WHAT TOOK THEM SO LONG?

So, Sixers coach Brett Brown has finally come to his senses as the team bounces around the bubble in Orlando.

He admitted yesterday he has been playing All-Star Ben Simmons “exclusively” at power forward and has been thrilled by what he’s seen.

“He’s so dynamic,” Brown said on a conference call with reporters. “Let’s just talk about running. There’s nobody faster in the NBA. So to always have the ball and dribble it up against five guys … to do that dilutes some of his potent weapons.

“So, watching him fly up the floor, watching him and Joel [Embiid] play off each other, has been a really good look. I think they’ve been fantastic together.”

But by playing Simmons at power forward, Horford — who was benched in February before Simmons hurt his back, allowing Horford to return to the starting lineup — will have to come off the bench again. It appears he would be replaced in the starting five by guard Shake Milton.

Milton was drafted in 2019 and spent last season on a two-way before signing a multiyear deal in the offseason.

He became a fixture in the Sixers rotation, averaging 9.5 points and shot 45 percent from 3-point range in 32 games (16 starts) this season. He scored in double figures in the final seven games before the season shut down, including a career-high 39 points in a loss in Los Angeles to the Clippers.

Joel Embiid said Milton has been impressive starting there in practice.

“He’s been amazing,” Embiid said. “He’s been the starting point guard, and I think he has a huge opportunity to help us accomplish what we believe we can. He’s been doing an amazing job and he’s running the team and we’re going to need him to knock down shots, which he did, before the league got shut down. He was on a roll so we’re going to need him to keep it going. But it’s great.”

Brown has said that his decision on the starting lineup is an evolving process — something he reiterated Monday. But he also spoke about Simmons playing off the ball, saying that the decision to play him at point guard was made because there was no one better to play it, and that Simmons has handled the situation exactly how Brown had hoped.

“You take somebody and say, ‘Here’s the ball.’ It’s not like Ben came in and we had Chris Paul on the team or Damian Lillard on the team,” Brown said. “We were young, and really not that good, so it was my decision, ‘You take the ball. We’re going to make you the point guard.’ It’s not like there was an established point guard that he had to bump out.

“[And] how has he responded to that? Like a star. Just a mature, ‘Whatever it’s going to take to get this team to be the best it can be with the pieces that we have that can be, I don’t know, just designed into a smooth thing’ … that is one of the pieces he has to offer.

“He’s been great accepting that, and really killing it in the environment that I just said.”

At 6-foot-10 with athleticism and ballhandling skills, Simmons has the ability to guard and play virtually every position on the court. And while his lack of a jump shot from the perimeter has been the topic of discussion since he was a rookie, playing him off the ball allows him to slip into a different role in the offense.

Specifically, it allows him to attack the basket on pick-and-rolls as the screen setter, rather than the ball handler, to take advantage of his size and quickness.

“I feel like I have a very high IQ on the court and see things a lot differently and can pass the ball very well, so that’s a threat,” Simmons said recently. “But I love playing in that pick-and-roll situation, or pick and pop, whatever it is. it just gives us so many different options and is tough to guard.”