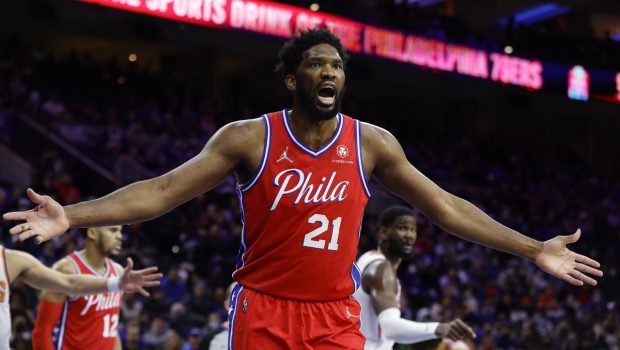 SIXERS MISSED JOJO LAST NIGHT, THEY MAY AGAIN IN DETROIT!

The Sixers played without Joel Embiid last night, and it showed.

They lost to the Chicago Bulls 126-112, snapping their 11-game home winning streak.

Embiid missed his second straight game on because of left foot soreness.

He’s been averaging 33.5 points, 9.8 rebounds, and 4.6 assists while shooting 53.2% from the floor and 34.1% from deep. He has been the engine that drives the Sixers and, at this point, the important thing is making sure he is healthy for when the games count down the line.

When asked how Embiid is doing and if there is a timetable for him, coach Doc Rivers gave the best answer he could.

“He’s just working his way back. He’s not gonna play tonight, and we’ll evaluate what he’s gonna do going to Detroit.”

When asked if he is concerned by the injury at all, Rivers succinctly answered: “No.”

The Sixers will take on the Detroit Pistons on Sunday on the road before returning home to host those same Pistons on Tuesday. Considering Detroit is not having the best season at the moment, the Sixers could view this as an opportunity to rest the big fella.