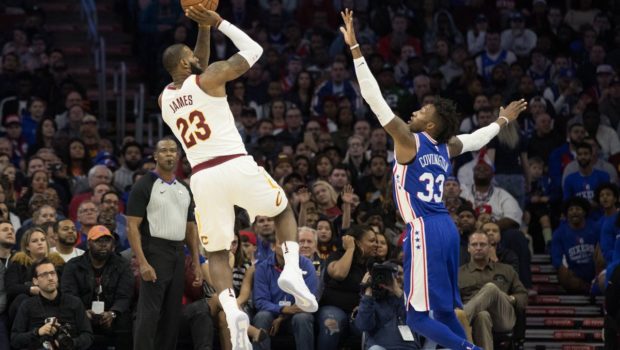 The Cavs showed the up and coming Sixers who’s boss, winning for the eighth consecutive time, 113-91.

LeBron James had 30 points, and Jeff Green, Dwyane Wade, Channing Frye and Kyle Korver combined for 50 points off the bench — and their defense showed more improvement, holding the Sixers to 37.6% shooting, including 10.7% on three-pointers.

Cleveland is the hottest team in the East, James is having another MVP-like season, Wade is finding his place with the second unit, and the Cavs keep giving reminders that they’re still the team to beat in the conference — knowing they get Isaiah Thomas back around Christmas and Tristan Thompson soon.

“We are just trying to get better each day, each game and we finally figured out who we are,” Cavs coach Ty Lue said. “We are getting better defensively. Offensively we are moving the basketball, sharing the ball.”

The Sixers learned the hard way.

“We didn’t play well on either side of the ball,” Philadelphia coach Brett Brown said. “We give them credit. But we go away feeling like this is not who we are.”

The Sixers missed 25 three-pointers, and it’s not like Cleveland played great defense or had great closeouts on every missed Sixers three-pointer. But the Cavs’ defense made Philadelphia work hard for its points.

Center Joel Embiid had 30 points, but he made just 11-of-24 shots. Ben Simmons had just 10 points and two assists — both below his season averages of 18.1 and 7.4. Robert Covington missed all nine of his three-point attempts.

“We need to pressure and be more active and disruptive, and they need to feel us and they didn’t,” Brown said.

The Cavs minimized Embiid’s interior defense by spreading the floor with big men at the three-point line.

“LeBron just attacked, attacked, attacked and kept attacking,” Embiid said. “That’s what the style of the game really was. … They got what they wanted. They took me out of the paint and I didn’t do my job, which I usually do, protecting the rim.”