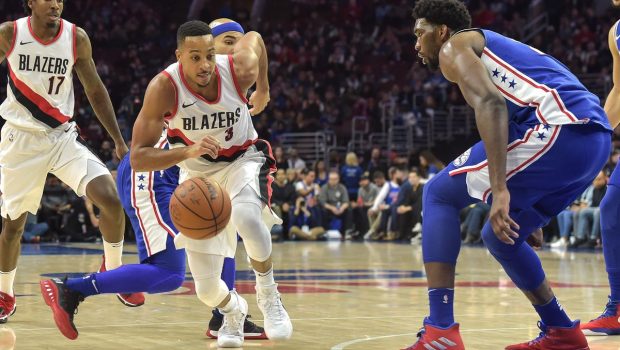 SIXERS MAY HAVE TO SETTLE FOR MCCOLLUM, NOT DAME IN BEN TRADE!

Lowe and Sixers analyst Spike Eskin discussed Simmons’ plummeting trade value on this week’s edition of The Lowe Post. His lack of shooting and floor spacing during the playoffs might be impacting his utility and the price he could draw on the NBA market.

“I have news for Philly fans, the GMs of the other teams watch the playoffs very very closely. And there are definitely teams that I have talked to in the last 48 hours who were once in on Simmons, who say, at lease to me, it could be posturing, “eh, we’re a little less in than we used to be.”

Lowe then touches on realistic trade targets, with the Blazers’ CJ McCollum as his first suggestion. Eskin reluctantly agrees that it’s something 76ers GM Daryl Morey would have to consider.

“I was on a station in Portland this morning and they asked me and I said “What about the other guy (Damian Lillard)?” and they both laughed at me.” “That’s the range we’re talking about, right, that’s … a name you have to consider.

“I know Sixers fans will be disappointed because even a week ago they were talking about Lillard and now we’re talking about McCollum but I think you have to to consider it.

Lowe adds that the only way a Simmons for Lillard trade happens is if the Portland star demands a trade and other pieces are included from Philadelphia.

Simmons, 24, has this season averaged 14.3 points, 7.2 rebounds and 6.9 assists, shooting 30 percent from three and 61 percent from the free throw line. He was also runner up to the Utah Jazz’ Rudy Gobert for Defensive Player of the Year.