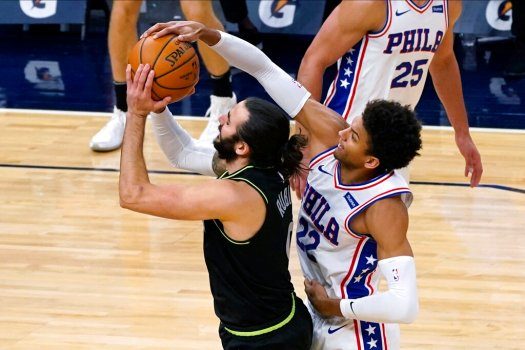 Sixers soph Matisse Thybulle was injured in training camp, so he had trouble coming out of the gate as Philly raced to a 14-6 record.

But after a strong game against LeBron James and the Los Angeles Lakers on Wednesday, Thybulle played lockdown defense last night against Minnesota Timberwolves guards Ricky Rubio and D’Angelo Russell. He had three steals and two blocks and his effort and energy helped keep Philly in it when the offense started slowly to help them win it 118-94.

“He had 12 deflections by himself in one quarter,” said Rivers. “Joel (Embiid) was amazing, if I was giving a game ball out, it probably would be Matisse or split it with those two. I thought he was a difference-maker. I thought he frustrated Rubio and then I thought he was phenomenal against D’Angelo Russell. He’s just a hell of a defender, he’s got his legs under him now, he knows what we expect of him, and he’s been terrific.”

Thybulle built himself a defensive reputation as a rookie and as he continues with his second season, he is continuing to show that off. His ability to really fly all over the floor and make plays defensively is what’s going to earn him more accolades for his future.

Russell shot 3-for-11 and Rubio was just 2-for-6 and Thybulle was a big part of that.

“We know what Matisse brings to the table defensively,” said Tobias Harris. “Tonight, you just saw an exhibition of how effective he is on the ball. He gets his hands on a lot of loose basketballs on the floor, his hustle, his length out there, you can put them on anybody pretty much one through five. He’s able to hold his own.”

Ben Simmons, who is an elite defender in his own right, is seeing a more mature Thybulle as the season wears on. He is stepping up when the time calls for it and he is more judicious when it comes to his thievery and jumping the passing lanes.

“He’s maturing a lot overall defensively,” Simmons explained. “He’s gotten a lot better. He picks and chooses when he’s gonna take riskier plays with steals and things like that. Tonight, you saw he was all in Rubio, getting a lot of deflections and making it tough all on the floor so he’s gonna be a huge part of this team.”

Of course, Thybulle will eventually have to start knocking shots down, but his defense has been a real difference for the Sixers whenever he is on the floor. His play in the first half against two really solid offensive players in Rubio and Russell was a huge in factor in Philadelphia taking a halftime lead despite their offensive struggles.

“That gave us a huge spark, especially with the second unit,” said Harris. “As his time continues to come in and he continues to get confident, he’s gonna start knocking down those shots, and taking advantage of different ways he can score offensively. That’s going to be key for us.”