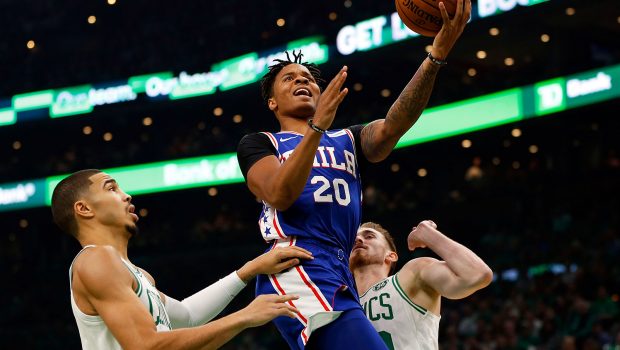 Markelle Fultz’s agent pissed on the rumor that he has asked the Sixers to trade his client.

From a great height!

On Wednesday, The Athletic’s Jared Weiss, Derek Bodner and Sam Amick reported — with no quotes and no one attributed by name — that Fultz is dealing with a wrist injury on top of the shoulder woes. In addition, The Athletic also reported that Fultz would “prefer a fresh start with a new team” as he works through these latest round of issues.

Fultz’s agent Raymond Brothers, however, told ESPN that he has not requested a trade from the 76ers on behalf of his client.

“I have given no indication to [general manager] Elton Brand or anyone else that Markelle would prefer to be traded,” Brothers told ESPN’s Adrian Wojnarowski. “My focus is to get Markelle healthy. End of story.”

Brothers has scheduled Fultz to see specialists in New York next week to look at his right shoulder. Until he does, Fultz will not practice or play in games.

Sixers management has been in contact with Brothers to discuss potential next steps, sources said.

Fultz was on the bench with his teammates for last night’s 121-120 win against the New Orleans Pelicans at Wells Fargo Center. He also attended Wednesday morning’s pregame walkthrough.

While Fultz deals with this issue, his teammates on the Sixers have been supportive of him. Veteran forward Wilson Chandler said the constant criticism and heckling Fultz is enduring can be tough on players, writes Keith Pompey of the Philadelphia Inquirer.

“You go home and turn on ESPN and people are talking about you,” Chandler told the newspaper. “You go on social media and people are talking about you. So I think you — and I think the same thing goes the rest of the players — try to just put yourself in his shoes and try to be an outlet for him and not judge him. It can be tough on your mentally.

“You just have to be there for him.”

When asked about The Athletic story after the game, Sixers general manager Elton Brand said: “Seriously, I have not read the story.” He then added he didn’t want to comment further on it.

“No one deserves to go through what he’s going through,” reserve guard T.J. McConnell told the Philadelphia Inqurer after the game.

“So all I can do is be there and support him and hold down the fort until he gets back. I’m saying a couple of prayers for him to get through this. You know, that’s like family to me like I said.”

Fultz was the starting shooting guard for the first 15 games of the season before the Sixers acquired Jimmy Butler. Since the trade, J.J. Redick moved into the starting lineup and Fultz’s playing time dwindled to a season-low of seven minutes against the Phoenix Suns on Monday.

After that game, when questioned about his decision to turn to McConnell over Fultz during the second half, coach Brett Brown didn’t commit to either player as his backup point guard.

“This news about his shoulder, it did catch me off guard,” coach Brett Brown said on Tuesday. “If it’s that real, and he needs to go see a further sort of consultation, then we support him.”

However, per Pompey, Fultz took part in light shooting with the Sixers on Tuesday even after Brothers’ said that wouldn’t be the case going forward.

Brand said Fultz’s agent told him the guard wouldn’t practice or play until the results of Monday’s examination. Brand said he was told Monday was the earliest Fultz could see a specialist.

“There’s nothing that we saw medically that didn’t allow him to play,” Brand said. “He played last night. He played two nights ago. Ever since Jimmy Butler came and he wasn’t starting, I felt he played pretty well. I was proud of the way he bounced back from a lot of things.”

Fultz has struggled with shoulder issues, which have affected his shot, since the Sixers drafted him in 2017. The former No. 1 pick played in just 14 games last season due to his shoulder situation and shot below 50 percent from the free-throw line.

During training camp, Fultz said his shoulder was healthy and he was ready to return to the team after an offseason working with skills trainer Drew Hanlen.

“I put in a lot of hours this summer to get up reps of going through a whole bunch of different situations,” Fultz said in September. “So coming in, I feel perfectly fine. I’m confident.”

Despite his confidence, Fultz has continued to struggle this season with averages of 8.2 points (on 41.9 percent shooting), 3.7 rebounds and 3.1 assists in 22.5 minutes over 19 games.