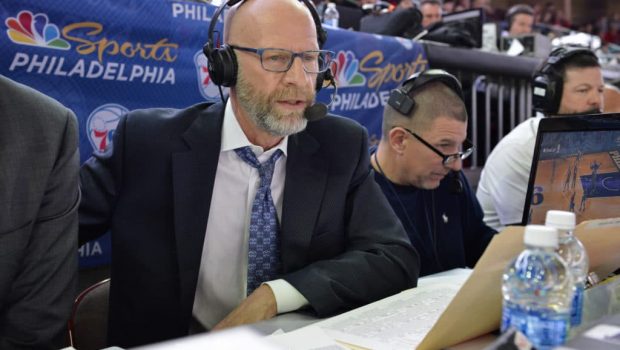 Marc Zumoff is ending his career his the Sixers voice after 27 years.

Here’s his going away note:

My father took me to my first 76ers game during the team’s initial season in Philadelphia, after it moved here from Syracuse.

As soon as I walked through the turnstile at the old Philadelphia Arena, I was startled by the crowd noise. A quick walk up some steps and I was overwhelmed by the sights and sounds. The bright lamps that hung from the ceiling. The thumping of the ball against the gorgeous hardwood. The satin uniforms. The squeaking of sneaks. The players talking. And the canopy of cigar and cigarette smoke that hung over it all.

It was February 29, 1964, I was eight years old; and that was the night the Philadelphia 76ers became my first love.

Religiously, I would comb the Philadelphia Bulletin the afternoon following a game for the box score. I would listen attentively to games on radio, captivated by the vivid word pictures provided by Andy Musser and Al Meltzer. And every once in a while, there’d be a game on a UHF TV station, the players barely discernible, small black and white broadcast images cloaked in a translucent curtain of static and snow.

A few years later, I would be transfixed by rock disc jockeys on AM radio as they “talked up a record” during the song’s intro, only to stop their patter just as the lyrics came in. I took to imitating this myself, and soon realized that I too liked announcing. Combining this with my love of the team, I would take to turning the sound down during 76ers games on the TV and “broadcasting” into my new cassette tape recorder.

As I performed, I dreamt that I, one day, would be the voice of the Philadelphia 76ers …