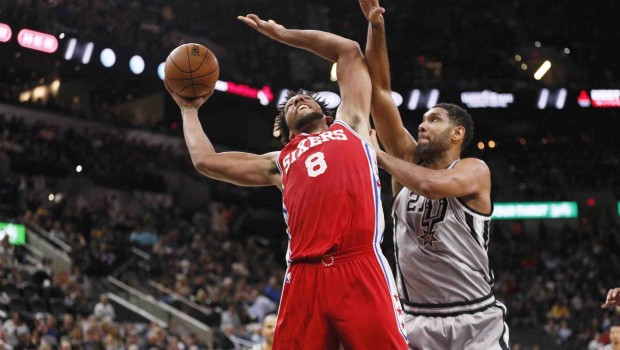 It’s hard for Sixers fans to see anything good coming out of the team’s 10th straight loss, but last night in San Antonio the Sixers made Spurs coach Gregg Popovich sweat.

LaMarcus Aldridge had 17 points and 19 rebounds to help the Spurs hold off a late charge and beat the Siers 92-83.

San Antonio has won four straight and is 3-0 at home, but Popovich knew it wouldn’t be easy against his friend and former longtime assistant, Philadelphia coach Brett Brown.

”They are going to play from minute one to 48 with the same standard, the same hustle, the same camaraderie,” Popovich said. ”It’s really a tribute to their character and Brett Brown as a coach. He just does a fantastic job.”

Sixer rookie center Jahlil Okafor had 21 points and 12 rebounds for his second double-double. Nerlens Noel, returning after a two-game absence due to a sore wrist, was limited to six points and three rebounds.

The Spurs led by as many as 19 points, but could never put the 76ers away decisively.

San Antonio was without Kawhi Leonard and Manu Ginobili, but their absence wasn’t felt against a young Philadelphia squad until the final minutes

Okafor scored seven points during a 14-2 run that pulled Philly within 87-83 with three minutes remaining.

”You have to give them credit, they made it hard until the end,” Parker said. ”That’s just Brett Brown’s team, they’re always in games.”

The Spurs forced three straight turnovers following that run to seal the victory, handing the 76ers losses in back-to-back nights following a 102-85 loss in Oklahoma City on Friday.

”We have to make a few more plays,” Okafor said. ”We turned the ball over. We know what we did wrong, we’re going to watch film and try correct those things when we come into tight situations.”

Parker, who was playing with a heavy heart, played only eight minutes in the second half.

San Antonio played France’s National Anthem after a moment of silence before tipoff to honor the victims of Friday’s terrorist attacks in Paris. Parker and Boris Diaw are both from France.

”It’s unbelievable,” Parker said. ”All my prayers go to the families of the victims. It’s tough.”

Parker scored 12 points in the first half and finished the game 5-for-10 shooting with three assists and four turnovers.

”It helped me think about something else,” Parker said. ”For the past 24 hours, I’ve just spent my time calling family and friends to make sure they’re OK.”