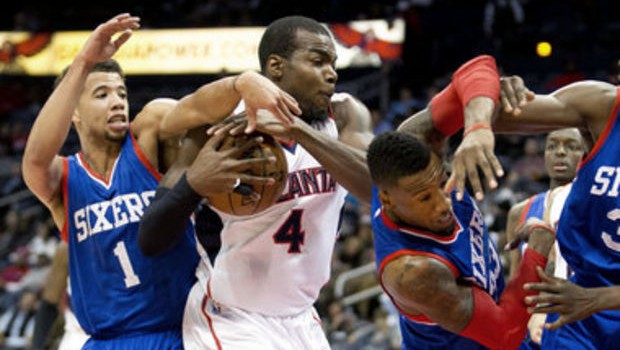 Casual Sixers fans will look at Saturday night’s 91-85 loss in Atlanta, shrug their shoulders and chalk it up to just another bump in the 2014-15 road.

But the Hawks have the NBA’s best record, and the fact that the Sixers were able to stay with this bunch till the end is just another sign that progress is the team’s most important product.

It took Al Horford, who scored 23 points, including a tying basket after Philly took its first lead late in the game, for Atlanta to recover after squandering a 21-point lead to beat and stretch its franchise-record winning streak to 19 games.

It was one of the biggest threats yet to a streak that began with a win at Milwaukee on Dec. 27 and has left the Hawks with the NBA’s best record.

”That was a rough game,” said Atlanta’s Jeff Teague, who made only three of 12 shots for 10 points. ”We had to battle it out and win any way possible.”

The Hawks led by 21 in the first half, but the 76ers came back to take their first lead at 83-81 on a jam by Nerlens Noel with less than 3 minutes remaining.

Horford scored to pull the Hawks even, and Dennis Schroeder’s 3-pointer with 1:35 left gave Atlanta an 86-83 advantage. Following a miss by Philadelphia’s K.J. McDaniels, Horford’s jumper gave the Hawks a five-point lead.

”You’ve put in a lot of work,” Brown said. ”Let it fly. Go ahead and get your legs into your shot, find your teammate and you will or you won’t. And they did.

”And we had to, because they do such a good job of guarding the paint, that’s all that was open.”

Luc Mbah a Moute, Michael Carter-Williams and Jerami Grant each had 13 points for Philly, denied its first three-game winning streak of the season. Noel had 11 points and 10 rebounds.

Horford had a game-high 11 rebounds, four assists and three blocks.

”Al made a lot of big plays,” Hawks coach Mike Budenholzer said. ”When the game got tight, defensively he went to the boards.”

Shooting problems returned in the first half for the 76ers, who ended a streak of 23 straight games below 100 points in Friday night’s 103-94 win over Minnesota. Atlanta led 49-34 at halftime as the 76ers struggled from the field and free throw line.