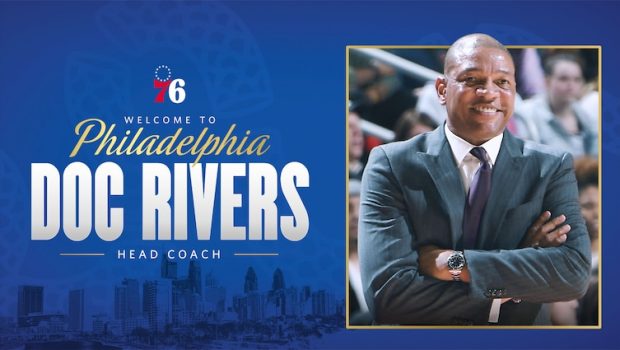 “I am really excited about the opportunity to be joining a world-class franchise, a franchise whose legend inspired my nickname,” Rivers said, referencing Hall of Famer and Sixers great Julius “Dr. J.” Erving. “This is a city that loves sports and loves their teams.”

This is the worst-kept secret that the Sixers just made official:

In his seven seasons with the LA Clippers, Rivers led the franchise to the fifth-best record in the NBA (564-356, .631), reaching the playoffs six times. Rivers’ Clippers earned 50-plus wins in four straight seasons from 2013-17, including a franchise-record 57 victories in 2013-14, when Chris Paul and Blake Griffin each earned All-NBA honors.

“We are thrilled to welcome Doc Rivers to Philadelphia as the new head coach of the 76ers. Doc is one of the most respected and accomplished head coaches in the NBA,” Sixers GM Elton Brand said. “I believe Doc can help us unlock our full potential on the floor and further our pursuit of an NBA championship. I also respect and appreciate that his impact extends far beyond the basketball court as he truly embraces the platform he has to drive positive change in society. Doc is a great fit for our team and city, and I’m excited for what the future holds with him as our head coach.”

In 21 seasons as an NBA head coach with the Clippers, Boston and Orlando, Rivers holds a 943-681 (.581) career record. His 943 wins are the second-most among active NBA coaches, while ranking 11th all-time in league history. Rivers’ teams have qualified for the postseason in 16 of his 21 seasons.

In Boston, Rivers amassed a 416-305 (.577) record over nine seasons, including consecutive 60-win campaigns from 2007-09. Rivers led the Celtics to a 59-47 (.557) overall playoff record during his tenure, reaching the 2010 NBA Finals, in addition to defeating the Lakers in the 2008 Finals. Prior to Boston, Rivers spent four-plus seasons with Orlando, earning NBA Coach of the Year honors in his first season as an NBA head coach. He’d go on to lead the Magic to three consecutive postseason appearances from 2000-03.