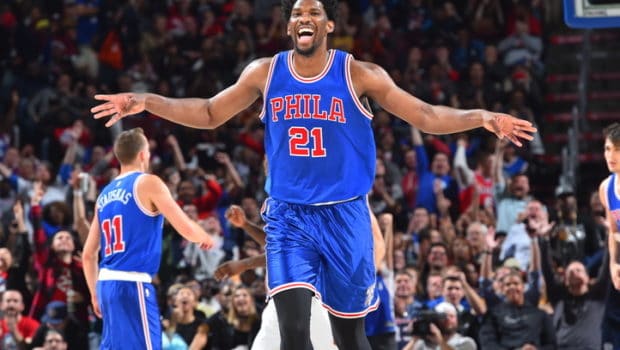 The champs escaped with a win last night at the Wells, but the young and hungry Sixers made them sweat!

LeBron James scored 25 points, moving into 10th place on the NBA’s career list, and added 14 assists and eight rebounds as the unbeaten Cavaliers held off the winless 76ers 102-101.

Kevin Love added 20 points and 11 rebounds for the reigning champion Cavaliers, who improved to 6-0.

Joel Embiid (above) scored 22 points, making all four of his 3-point attempts, but the 76ers dropped to 0-5.

James passed Hall of Famer Hakeem Olajuwon by converting a fast-break layup midway through the first quarter. Olajuwon finished his career with 26,946 points.

It looked to be an easy night for the Cavaliers at that point. But the 76ers nearly shocked them.

After a turnover by Sergio Rodriguez, J.R. Smith missed a 3 with 15 seconds left that would’ve clinched it. Sixers coach Brett Brown then called a timeout with 7.3 seconds remaining. The 76ers were trying to get the ball to Embiid, but they couldn’t and Gerald Henderson turned the ball over as he tried to get a shot off in the final seconds.

Henderson said a foul should’ve been called on the play.

“We tried to run something to get it in to (Embiid),” he said. “Time was running down so I just took it myself. I got fouled. They didn’t call it. And it’s the end of the game.”

Said Brown, “The tape will show what the tape shows. That’s obviously a tough way to end a great game.”

James’ first attempt at passing the record was an emphatic, highlight-reel block by Embiid about 3 1/2 minutes into the contest. After two more misses, James quickly raced up the court for an easy layup to reach the milestone.

“It’s a blessing and an honor,” James said.

He is No. 12 in scoring on the combined ABA/NBA list.

The 76ers remained one of three winless teams in the NBA, along with Dallas and New Orleans. Philadelphia opened last season by tying a league record with 18 straight losses.

Philly battled back from an 18-point, first-half deficit, outscoring Cleveland 16-9 over the first 5:50 of the final quarter, taking its biggest lead on Henderson’s short jumper that made it 96-91 with 6:10 remaining. Smith’s 3-pointer with 2:50 left put Cleveland back in front, 99-98. But Ersan Ilyasova answered with a 3-pointer 13 seconds later to give the 76ers a 101-99 advantage.

The Cavaliers used a 16-0 run to finish the first quarter, helping them to a 34-19 lead. James played all 12 minutes of the opening quarter, finishing with six points, four rebounds and seven assists.