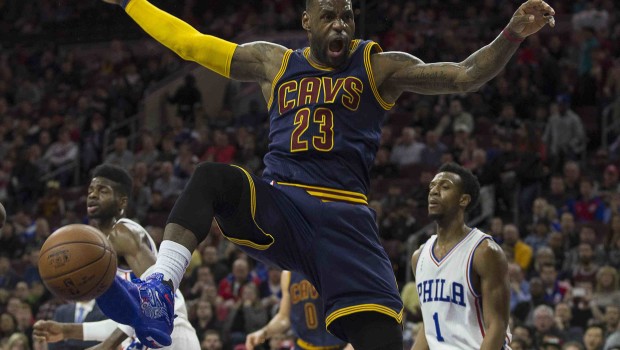 The Sixers got a dose of future shock last night at the Wells:

The defending Eastern Conference champ Cleveland Cavaliers are what they aspire to be, and for a while they gave LeBron James and Co. a great fight.

But then James (above) took over and lifted the Cavaliers to their seventh straight win, 95-85.

He tied a season high with 37 points and pushed both hands up in the air after several powerful dunks (above), drawing a rise out of the nearly 20,000 fans at the Wells Fargo Center. He had nine assists and seven rebounds in Cleveland’s 13th win in the last 15 games.

“They look at me as the leader of this team and I’ve got to be that way all year round,” James said. “They needed me a lot tonight and I was able to come through.”

James even tossed the ball backward over his head after the whistle and watched it plop through the net.

He must have wished the bucket counted because the Cavaliers couldn’t put away the NBA-worst 76ers until the fourth quarter.

The Sixers pulled as close as two points with 8 minutes left before James thwarted the upset bid.

Jahlil Okafor scored 21 points for the Sixers and Ish Smith had 18 points and 10 assists.

“I think it helps any time you can play against a team that is championship material,” coach Brett Brown said. “You weigh yourself up against the best and we came out of it quite well.”

With only four wins, the 76ers were 27th in the league in attendance. But with basketball’s reigning king in the house, the Sixers boasted a near-sellout crowd of 19,226.

“I love these fans here,” James said. “They love their sports.”

They nearly got their wish of watching a vintage James performance coupled with a 76ers win.

James would not let that happen.

The Sixers inched to 81-79 when James took control. He buried a 22-footer from the wing, grabbed a defensive rebound and made one of two free throws. James tossed in an awkward, falling layup – complete with a stare-down of Hollis Thompson – then hit a 3-pointer.

“He’s been doing that for a long time,” coach David Blatt said. “It’s nothing new.”

James, 15 of 22 from the floor, nearly pulled down the rim with a dunk in the first quarter. He raised the roof in celebration. He raised it a few more times during the game, including one last powerful dunk in the fourth that made it 93-79.

“When he’s making shots like that, what are you going to do?” Smith said. “You just have to shake his hand.”

James had plenty of help. Kevin Love had 15 points and 15 rebounds and had a few spot-on outlet passes to James for some of his seven assists.