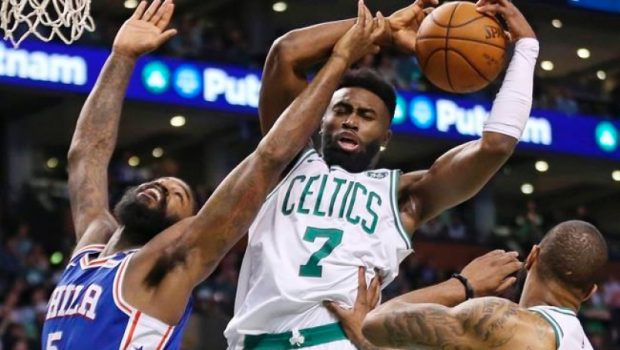 SIXERS LOST MORE THAN A GAME: THEIR SOULS WERE CRUSHED!

So says Dan Shaughnessy in the Boston Globe:

The Celtics overcame a 22-point, first-half deficit and beat the Sixers 108-103 to take a 2-0 series lead in their conference semifinal.

Brad Stevens and the Celtics did more than just win a game. They pantsed the Sixers. They crushed their souls. They maybe took away Philly’s will to live in this playoff spring.

When it was over, in the midnight hour, ever-flatline Stevens sent all the credit elsewhere, saying, “This was a win largely attributed to the unbelievable effort of our players and the other 18,000 people in here.’’

It is the humble Hoosier way. But we know better.

The Celtics were underdogs in Vegas coming into this series. Philly was NBA Flavor of the Month. The young guns from Philly had won 20 of 21, including an easy five-game, first-round rout of the Miami Heat. The Sixers have the best player (Joel Embiid) and had all the momentum. After four years of Trusting the Process, this was Their Time.

But Stevens and the Celtics have erased all that momentum, beating the Sixers twice in Boston.

Monday was effectively a wire-to-wire job and the Celtics won by 16.

Rust, said Sixers Nation. Philly had been off for almost a week. They were flat. Certainly they would show everybody in Game 2.

“That isn’t who we are,’’ 76ers coach Brett Brown said after Monday’s loss. “To think that this game is a reflection of what we’ve been doing the last few months would be a mistake.’’

The Wiseguys in Vegas bought it, establishing Philly as a 4-point favorite on the Garden parquet. This seemed pretty amazing, given that the Celtics won the first game decisively and were still playing at home.

We did. On a wildly entertaining playoff night, with dramatic swings for both teams, we saw the Sixers flex their considerable muscle as they rained threes on the heads of the Celtics and beat the Celtics to the glass early.

It was 48-26 midway through the second quarter (“I didn’t know if it was going to be a game,’’ acknowledged Stevens) and NBA America nodded sagely, secure in the knowledge that the Sixers had established their supremacy: