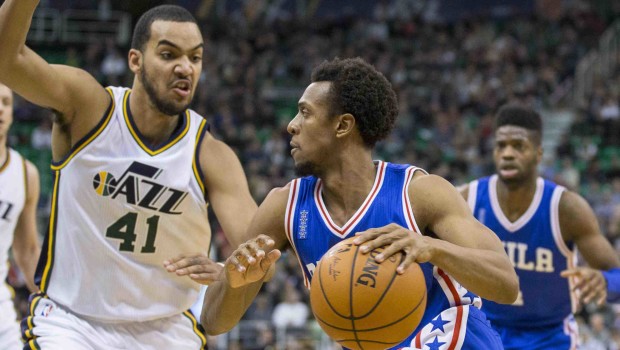 SIXERS LOSE TO JAZZ 95-91, BUT THE ISH SMITH EFFECT IS UNDENIABLE

Smith (above) scored a season-high 22 points in his second game with the 76ers after being acquired from the Pelicans. Nerlens Noel (right) scored 18 points, grabbed six rebounds and blocked five shots.

The Sixers were missing rookie center Jahlil Okafor with knee soreness, and the Utah Jazz didn’t have several of their key players.

But last night’s 95-91 victory over the Sixers was another example of the short-term effect of Ish Smith on the Sixers’ state of mind.

The Jazz led by 19 midway through the third quarter, but the 76ers went on a 29-10 run to close the quarter. Nerlens Noel’s dunk off a slick pass from Smith gave Philly its first lead of the night at 78-76.

The teams were tied when Noel caught an alley-oop from Smith to put the 76ers up 91-89 with 38.3 seconds remaining.

Gordon Hayward scored 24 points, including a 3-pointer that put the Utah Jazz ahead for good.

The 76ers (2-31) failed to win consecutive games for the first time this season after winning its second game on Saturday.

”As a group, we had tremendous energy,” 76ers coach Brett Brown said. ”That third period on both sides of the ball is as good of a period as we have played.”

Smith scored a season-high 22 points in his second game with the 76ers after being acquired from the Pelicans. Noel scored 18 points, grabbed six rebounds and blocked five shots.

Trey Burke scored 14 for the Jazz.

Utah jumped out to a 37-23 lead in the first quarter with 57.1 percent shooting from the floor. The 37 points were its season high for any quarter this season.

”Sometimes part of the process is learning how to win,” Jazz coach Quin Snyder said. ”There’s plenty to be disappointed about. … What did happen tonight was Gordon made a terrific shot at a point where we could have easily lost the game. A 20-point lead in the NBA is nothing, especially in the first half.”