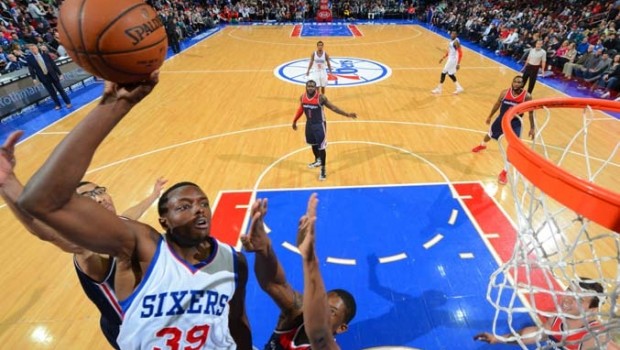 The Sixers may officially be considered to be playing out the string.

They lost to the Washington Wizards last night at the Wells 119-90, and in the process their best player, Nerlens Noel, left in the third quarter with a sprained ankle after scoring only five points and grabbing eight rebounds.

Bradley Beal scored 21 points and the Wizards shot a franchise-record 65.3 percent from the field in their 119-90 victory.

Trying to earn home-court advantage in the first round of the playoffs for the first time since 1979, the Wizards remained a game behind fourth-place Toronto in the Eastern Conference and also pulled within one game of Chicago, which lost to Orlando on Wednesday night.

Robert Covington scored a career-high 27 points on 8-for-11 shooting for the Philadelphia, and Jason Richardson added 17. The 76ers have dropped seven straight.

The Sixers never led and shot 34.8 percent from the field.

“We started the game so poorly,” Sixers coach Brett Brown said. “We subbed our first group out quickly trying to find some life but I thought the first half defensively was just poor.”

Wall had a career-high 18 assists in Washington’s 92-83 victory at Memphis on Saturday night and averaged 15 points, 12 assists and 4.3 rebounds in the Wizards’ first three games with the Sixers this season.

The Wizards were shooting over 71 percent early in the first quarter as they threatened to set the NBA record (70.7). But Wittman was mostly pleased that his team had assists on 35 of its 47 made baskets, with Sessions and backup point guard Will Bynum each contributing seven.

“When we keep it simple and move the ball, we have guys that can make plays and make shots,” Wittman said. “And that showed tonight.”

After Jerami Grant’s slam (photo above) pulled the 76ers to 82-71 with 5:30 left in the third quarter, the Wizards hit three straight 3-pointers to build a 91-71 lead. They led by 27 before emptying their bench midway through the fourth quarter.