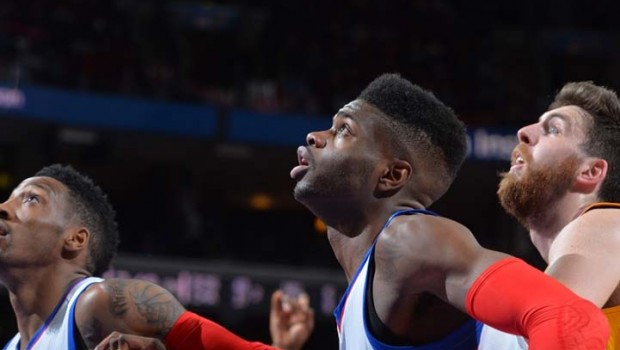 Nerlens Noel led the 76ers with 19 points and 14 rebounds for his ninth double-double of the month and his fourth in the past five games. He scored six points in the final minute of overtime to tie the game at 111.

What’s the opposite of the immovable object meeting the irresistible force?

In the NBA, it’s the Los Angeles Lakers playing the Sixers, two of the league’s worst teams.

And last night at the Wells, Jordan Clarkson scored 26 points and made the tie-breaking basket with 0.7 seconds left in overtime to lift L. A. past the Philly, 113-111.

The rookie guard helped the Lakers pull out a game both teams had incentive to lose. The Sixers currently hold the league’s third-worst record and the Lakers the fourth-worst mark. Philly will get the Lakers’ first-round pick through a previous trade if it falls out of the top five.

But coach Byron Scott brushed aside any talk of lottery balls and what Monday’s win could mean for the draft.

“I don’t care about that stuff,” he said. “It’s all about trying to get better as a basketball team and trying to win games.”

Ellington, a Philly native, also fed Clarkson for the go-ahead layup, drawing a double team and finding him wide open under the basket right before time expired.

“I was trying to get myself in a good position to rebound the ball and Wayne got space to shoot it,” Clarkson said. “I guess he just saw me under the basket cutting. And I just made the play.”

Rookie Nerlens Noel led the 76ers (18-57) with 19 points and 14 rebounds for his ninth double-double of the month and his fourth in the past five games. He scored six points in the final minute of overtime to tie the game at 111.

“He wants the ball,” Sixers coach Brett Brown said. “I’m at a stage personally where I have confidence that he’s going to step up and not be intimidated by the moment.”

But Clarkson tied the game three times in the final minute of regulation: at 98 with a running layup with 49 seconds remaining, at 100 with two free throws with 22 seconds left and at 102 with two more free throws with 11.1 seconds to play.

“If I fail, I know I’m going to come back up the next day,” said Clarkson, who added 11 assists. “I didn’t have a good game against these guys at home, so I wanted to come out here and play hard. It just turned out to be one of those games.”

Smith missed a running layup at the buzzer, sending the game into overtime.

Lin was averaging 21.2 points in his last four games before getting sick, including a 29-point outing in the Lakers’ 101-87 win over the Sixers on March 22.