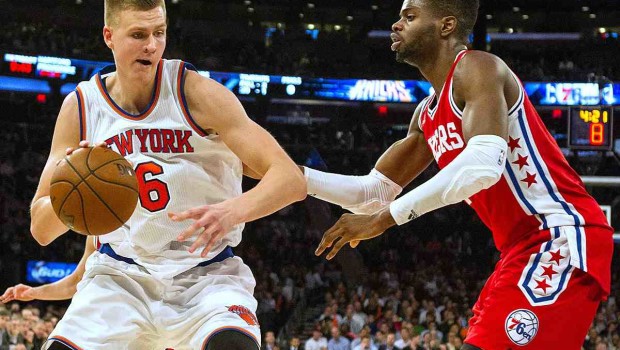 Carmelo Anthony returned from a two-game absence and made a tying 3-pointer with 3.4 seconds left in regulation, and the New York Knicks beat the Sixers 119-113 in two overtimes Monday at Madison Square Garden.

Anthony was just 7 for 28 from the field after sitting out two games with a sprained right ankle. But he made the most important shot he took, a 3-pointer from straight away over Nerlens Noel (above right) after the Knicks were on the verge of losing a game they led by 18 points in the third quarter.

Arron Afflalo led the Knicks with 25 points and Anthony had 19 points, seven rebounds and seven assists. Rookie Kristaps Porzingis had 16 points and 12 rebounds but sat out the overtimes after hurting his right foot trying to grab an offensive rebound.

Ish Smith had 16 points and 16 assists for the Sixers, who were seconds away from a second straight victory but couldn’t overcome their 13-of-25 shooting from the free throw line.