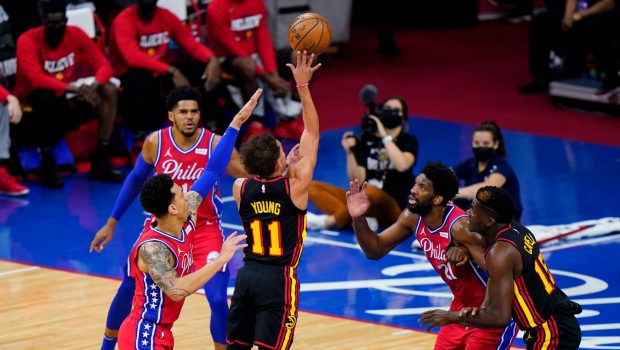 76ers coach Doc Rivers hasn’t made many mistakes this season, but putting Danny Green on Hawks scoring star Trae Young in game 1 was a doozy!

After watching Young shred the NY Knicks in the 1st round of the NBA playoffs, Rivers should have realized that Young was going to need special attention versus the Sixers. He got it Tuesday night as the series was tied 118-102 at the Wells Fargo Center before 18,624 wild fans who were full-throated beginning to end!

Sixers star center Joel Embiid once again schooled the Hawks on what the best big man in the Association looks like, blasting them for 40 points and 13 rebounds. He joined 76ers greats Wilt Chamberlain, Julius Erving, Billy Cunningham and Allen Iverson in that 40 point playoff club.

Embiid got help this time — Shake Milton joined in on the fun with 14 critical points in the second half as the Sixers pulled away from Atlanta.

But the biggest difference from game 1 was relentless defensive pressure on Trae Young all game long. Ben Simmons was face-to-face with the Hawks leading scorer, Matisse Thybulle took a turn at slowing him up too. Simmons, Thybulle, Dwight Howard and Embiid held him to 21 points, far less than the 35 in game 2, essentially the point difference in the game.

Game 3 is Friday in Atlanta, and if the defensive pressure remains tough they will have a good time the rest of this playoff series.