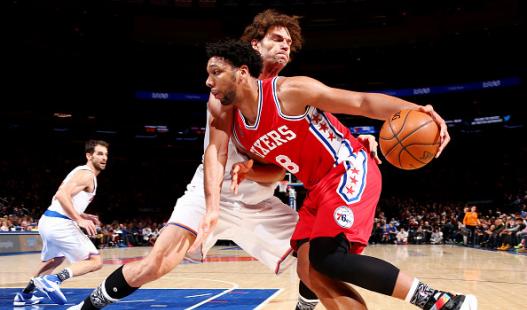 SIXERS LIMP TO THE END OF SEASON TONIGHT AGAINST HORNETS

Sixers rookie Jahlil Okafor missed the last game with a bruised shin and may play tonight.

The Sixers enter the final six weeks of the lost 2015-16 season tonight against the Charlotte Hornets at the Wells.

They’ve already endured losing streaks of 18 and 12 games this season, and another defeat would make them the first team to have three slides of at least 10 since the New Jersey Nets in 2009-10.

Philly was officially eliminated from playoff contention with Monday’s 116-108 loss at Washington. Coach Brett Brown, though, saw reason for optimism and cited the Sixers’ 34-19 scoring edge in the third quarter.

“I was proud of a lot in that game. The third period, the camaraderie on the bench, the spirit on the floor,” Brown said. “We just have to play longer.”

It’s unknown if Jahlil Okafor will be available after he sat out Monday with a bruised right shin. The center leads the team and all rookies with 17.5 points per game.

He scored 10 points on 4-of-12 shooting at Charlotte in November.

Ish Smith did his part to make up for Okafor’s absence Monday, scoring 25 points with seven assists. The guard is averaging 15.9 points in 14 home games since being acquired in a trade with New Orleans.