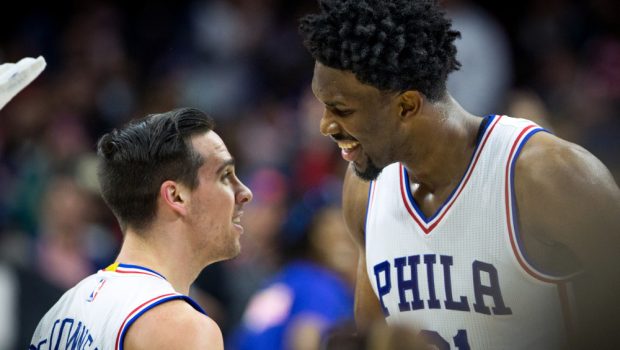 SIXERS LICKING THEIR CHOPS WITH KNICKS IN TOWN TONIGHT!

As the Flyers are imploding and the Eagles struggle to stay relevant in the NFL playoffs race, the best team in town is licking its chops!

Jimmy Butler had 34 points, including a 3-pointer with .4 seconds left, to lift the 76ers to a 127-125 win at Brooklyn on Sunday. Seven days prior, he hit a game-winning 3-pointer with zero seconds left in overtime to defeat the Charlotte Hornets.

“Another play drawn up by coach,” Butler said. “My teammates have lot of confidence in me to take shots late, hopefully I make shots late as well. But I mean, I got to the spot that I wanted to get to, raised up and knocked it down.”

His coach, Brett Brown, was more impressed by Butler’s hustle on the previous play, when he dived for a loose ball to secure the final possession.

“The TVs are going to replay his shot; I hope they go a few seconds earlier and see him dive on the floor and secure a jump ball,” head coach Brett Brown said after the game. “Similar to the play he made in Charlotte where he saved it over his head and then came back and made the shot, there’s another connection to this shot that he makes at the end of the game to win it for us.

“He was massive going down the stretch in the fourth quarter.”

The Knicks are coming off a game in which they exploded for 38 fourth-quarter points themselves, but an early deficit proved too difficult to overcome against the surprising Pistons, who improved to 11-7 on the year.

The loss snapped a three-game winning streak for the Knicks, the team’s first sustained success of the season.

“You just try not to get seduced by our success,” Fizdale told reporters at the team’s morning shootaround. “I don’t want our team to focus as much on the end result as much as what we did to get it. I know it’s corny but my cliche is chop the tree. We’re not paying attention to when the tree falls.”

Philly is looking to get back on a streak after a shocking 121-112 home loss to Cleveland on Friday, snapping a 10-game home winning streak to start the season.

Sunday’s loss should help in the confidence department: The 76ers came back from a 20-point deficit as Butler took charge.

“I think it was being desperate, playing desperate,” Ben Simmons said after the win. “We needed that win. Obviously coming off a loss to the Cavaliers wasn’t something we wanted. So coming into Brooklyn you know, we already had a loss here at the start of the season so we wanted to come here and make sure we got the job done.”