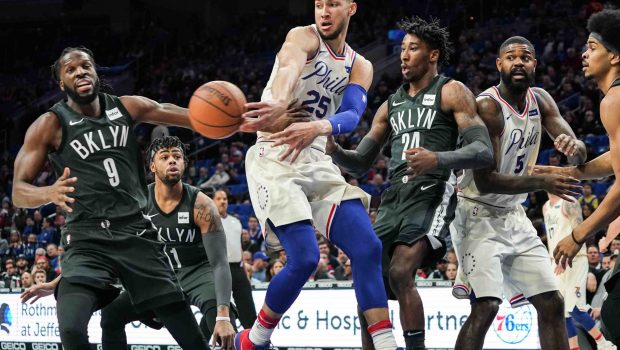 SIXERS LEAVE IT TO BENNY AND JJ FOR 11TH STRAIGHT WIN!

For the Sixers, the hits just keep on comin’.

J.J. Redick scored 19 points and Ben Simmons had 15 points and 12 rebounds to lead their 1th straight victory, 121-95 over the Brooklyn Nets.

That kept the 76ers in fourth place in the Eastern Conference with five games remaining.

If the playoffs started today, the 76ers would host a first-round series. They remained a half-game behind third-place Cleveland and in front of fifth-place Indiana, which began was a half-game behind Philly. The 76ers have five games remaining, including Friday’s home contest against the Cavaliers.

Redick said that goal helped Philadelphia easily dispatch the Nets, who merely are playing out the string.

The veteran guard even got some welcomed rest.

Neither Simmons nor Redick played in the fourth quarter for Philadelphia, which won its third consecutive contest without All-Star center Joel Embiid. Embiid had surgery on Saturday after suffering an orbital fracture in his left eye in Wednesday’s 118-101 win over the Knicks. Embiid will be out for the remainder of the regular season and is slated to return for the playoffs, although his exact return date is not known.

Brooklyn coach Kenny Atkinson was displeased with the effort.

“From a physical and mental standpoint, we weren’t focused and ready to play,” he said. “It was evident. We were not engaged physically or mentally and that’s what happens. It was a layupathon.”