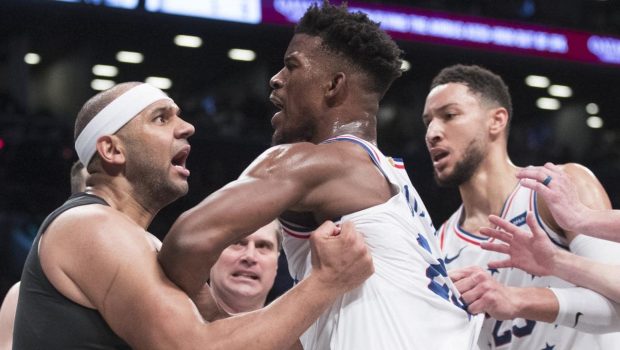 The Nets keep whining about treatment by the Sixers — and the refs, if you believe them — in their playoff series.

After Philly took a commanding 3-1 lead on Saturday, Nets general manager Sean Marks has been suspended one game without pay and fined $25,000 for entering the referees’ locker room after Brooklyn’s loss in Game 4 of their Eastern Conference playoff series.

The Nets lost 112-108 on Saturday in a game in which Brooklyn’s Jared Dudley and the Sixers’ Jimmy Butler were ejected after a scuffle broke out following Joel Embiid’s flagrant foul against Jarrett Allen in the third quarter.

That call will remain a flagrant foul 1, sources told ESPN’s Tim Bontemps, which means Embiid will remain with two flagrant foul points for the postseason. If a player reaches four, he earns an automatic one-game suspension.

The Nets were already angry about the flagrant 1 Embiid committed against Allen in Game 2, and coach Kenny Atkinson complained that the 76ers held Allen before he turned the ball over on the Nets’ last chance to tie the game.

The Nets and Marks believed Embiid’s flagrant 1s should’ve been deemed flagrant 2s, a source told ESPN’s Adrian Wojnarowski. More than sending a message to the league by challenging the referees, Marks intended to send a message to his team that the franchise is determined to support the way the players are competing in the series, the source told Wojnarowski.

The penalty was announced Sunday by Byron Spruell, the NBA’s president of league operations.

Marks will serve his suspension on tomorrow night when the 76ers try to wrap up the series in Game 5 in Philly.

Dudley and Butler were fined $25,000 and $15,000, respectively, for their roles in Game 4’s scuffle, the NBA announced Sunday in a news release.