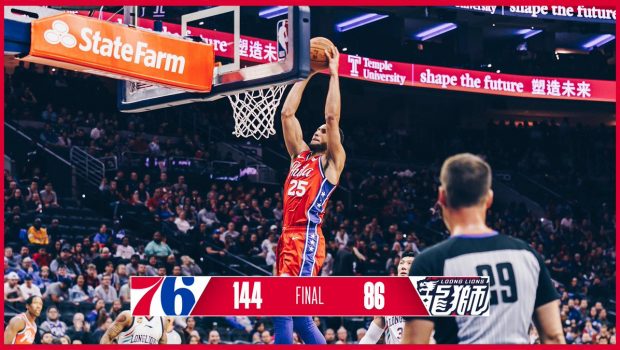 The Sixers rolled out their new look last night at the Wells, and Ben Simmons racked up 21 points, eight rebounds, and seven assists in a 144-86 win over the Guangzhou Loong-Lions.

Joel Embiid bagged 17 points, nine of which came from the free throw line.

Josh Richardson went 6 for 9 from the field, and connected on 3 of 5 3-point attempts.

After turning heads over the weekend with his aggressive, pesky defensive play at the Blue x White Scrimmage, Matisse Thybulle stood out again. He continued to prove an irritant on defense, tallying three steals and two blocks. The 2019 no. 20 pick netted 10 points (4-6 fg, 2-4 3fg) as well.

On the whole, the Sixers shot over 53% from the floor, buried 16 threes, and outrebounded the opposition by 11 (including a plus-9 advantage on the offensive glass).