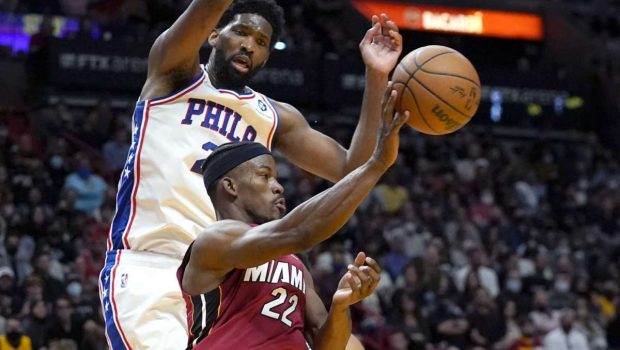 “There’s no way I could have played worse than I did in the first half,” Embiid said of his 3-for-11 shooting. “I feel that I was probably the worst player in the NBA in that first half. All I needed to do was be aggressive.”

Tobias Harris added 22 points on 9-of-13 shooting. Seth Curry finished with 21 points for the 76ers, who have won nine of 10 and have pulled to within 2 1/2 games of the Nets, leaders in the Eastern Conference.

“Obviously, we got down early but we used our defense to climb back in the game,” Harris said. “And we just stayed composed throughout the second half.”

Philadelphia didn’t relinquish the lead after Harris’ layup in the second minute of the fourth quarter for a 77-75 advantage.

“There are a lot of games in the regular season that you’re really happy about,” 76ers coach Doc Rivers said. “It feels bigger than one game. That’s all it is at the end of the day. Just coming here and winning a game when they’re playing great, it’s a great time for us.”

Omer Yurtseven scored a career-high 22 points and had 11 rebounds for Miami. The rookie center extended his string of double-figure rebound games to 14.

The 76ers erased a 12-point deficit early in the third period with a 26-12 run to close the quarter. Curry’s 3-pointer to end it put Philadelphia ahead 75-73 for its first lead since the first period.

Miami’s Jimmy Butler, who averages a team-leading 23.2 points, finished with eight points on 1-of-11 shooting. In addition to Butler’s shooting woes, teammates Kyle Lowry shot 2 for 11 and Duncan Robinson 1 for 9.

“It’s part of the game,” Butler said. “You’re not going to make shots every night. But I don’t think myself or anybody else missing shots is going to break us in any way. I think if we guard a little bit better, lock in on that side of the floor, we’ll always give ourselves a chance to win.”