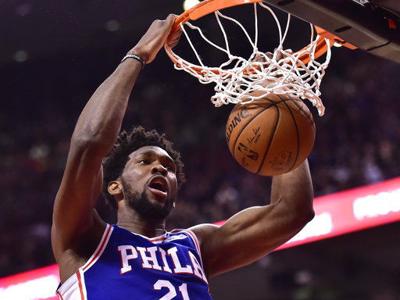 The difference in last night’s Sixers 113-102 loss at Toronto was Joel Embiid:

As in, the self-styled NBA MVP was a no-show, bagging only 10 points and 12 rebounds!

And he knew it:

“The past few games, I’ve been so trash, he said.”

After shooting 47.6 percent or better from the field in five straight games, that number has fallen in three consecutive games.

After shooting 5-12 (41.7 percent) in the Sixers’ blowout win against the Washington Wizards, Embiid has made just 9-30 over a two-game span to start the month of December. In that stretch, he shot 30.8 percent against the Memphis Grizzlies and 29.4 percent in the loss to the Raptors.

Some believe it could be fatigue, as the 24-year-old has logged 30-plus minutes in all but two of the team’s 26 games.

Regardless, there’s little reason to believe Embiid is regressing, and it’s far more likely that we can chalk this up to either fatigue or simply a bit of a slump.