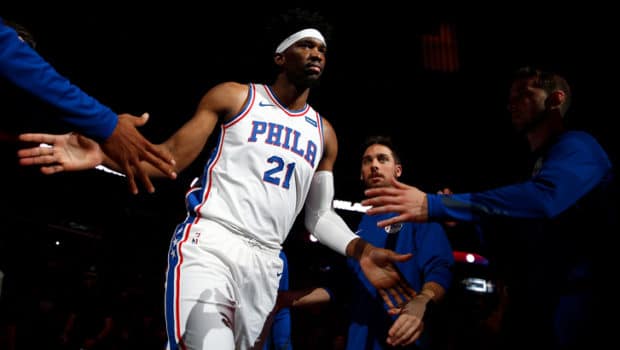 Tonight’s Sixers-Pistons game at the Wells has an intriguing sub-plot:

Philly’s Joel Embiid vs. Detroit’s Andre Drummond on the court and on the trash-talking!

In the first meeting on Oct. 23, Embiid had 30 points and nine rebounds, lifting the Sixers to their first victory of the season and jump-starteing their early season surge.

Embiid has made headlines on and off the court — both with his play and trolling opponents through reporters’ cameras and recorders, as well as through social media.

In the first matchup, Embiid lit a fire, saying that Drummond was talking trash throughout the game, which fueled Embiid’s onslaught.

“Defensively, he doesn’t play any defense,” Embiid said.“When we started the game, he was being aggressive and he was talking, too. … So what I was like (in my mind), ‘You want to do that? I’m going to kick your [butt] then. So that’s what I did.”

As the game wore on, Embiid was energized by the back-and-forth — which Drummond said wasn’t any more than a normal game.

“Everybody knows me — I talk (trash) to everybody; it’s just what I do,” Drummond said the next day.

“I don’t say anything extra to anybody. I talk the same to everybody, whether you’re my friend or anybody else.

“I don’t say anything extra because it’s Joel Embiid; I don’t need to do that. I just speak the way I speak. If he felt some type of way, that’s on him.”

Drummond took to Twitter and ended the discussion: “See you Dec. 2.”

“I actually forgot,” Drummond told the Detroit News. “I’m just taking one game at a time. I’m not going to alter my game based off one player.