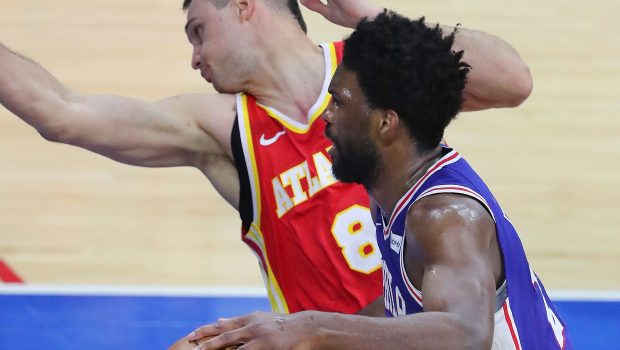 SIXERS JOJO TO HAWKS AND REST OF NBA: GET OUTTA’ MY WAY!

Sixers Joel Embiid missed Game 5 against the Wizards, but he has scored 79 points through two games including scoring a playoff career-high 40 in Game 2 win over the Hawks.

“That was awesome,” said coach Doc Rivers. “I don’t know if the MVP thing did anything to him or not. I remember being on the other side of the night that David Robinson got the MVP and we had to play (Hakeem) Olajuwon I was on that Spurs team, that didn’t go well for us tonight. You felt like that was Joel, he was that magnificent, dominant for us early on, but it was absolutely a team effort. I just thought he set the tone for us and that’s what he has to do obviously.”

Playing with a torn meniscus is not easy in the slightest and Embiid has made it look so easy out on the floor. The big fella has been absolutely terrific and he has really put his body on the line to get wins in the postseason.

“He’s doing a great job,” said Tobias Harris. “I think that he’s coming out and dominating, but once you step on that floor, there is no excuses. He understands that this is the playoffs. The way that NBA season was, I don’t think anybody is 100% so when he steps on that floor he has that attitude and mentality, that’s to win.”

Another new playoff career high for @JoelEmbiid with 40 points.

He's the first 76er with 40-plus in a playoff game since @alleniverson.