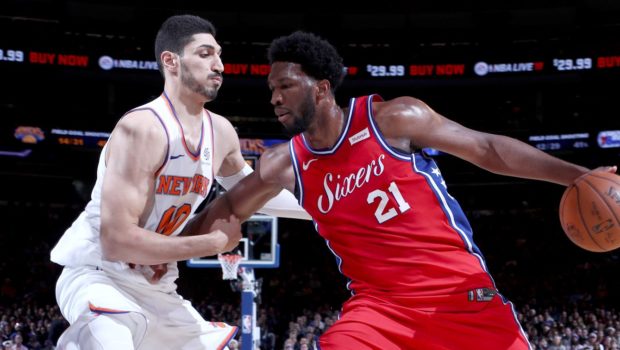 SIXERS’ JOJO TAKES THE HO HO OUT OF THE KNICKS!

The Sixers had a great Christmas in Manhattan.

And no one had a better time than Joel Embiid!

He wasn’t about to let a sore back keep him away from Christmas Day, national television and Kristaps Porzingis.

Embiid and Enes Kanter each put on a dazzling display, but Embiid made more plays when it mattered as the Sixers defeated the Knicks, 105-98, to end a five-game losing streak and hand the Knicks their fifth straight defeat on Christmas Day.

“And to be able to be one of the few teams in our league that can play on this day, it just shows you how much we’ve improved.”

Embiid scored 25 points in his MSG debut, including a corner three as the shot clock expired that gave Philadelphia a 101-93 lead with 2:25 to play.

Embiid’s status for Christmas was uncertain yesterday morning due to lower back pain. Embiid had missed three straight games, all losses, after playing 48 minutes in the Sixers’ triple overtime loss against Oklahoma City on Dec. 15. He returned to the lineup Saturday, but was still hurting.

“You don’t want to play with back issues,” he said. “If I had felt something I wasn’t going to play.”

Embiid made 8 of 17 shots with 16 rebounds and he converted 7 of 8 free throws. He has the ability to play in the post and out on the perimeter.

The Sixers were a plus-25 during Embiid’s 35 minutes on the floor. In the battle of the league’s top young big men, Embiid got the best of Porzingis, who finished with 22 points but missed 13 of 19 shots. Porzingis had a rough fourth quarter, 2-for-9 from the field and missing four of eight free throws. Porzingis also committed a crucial turnover when Ben Simmons, who also made his MSG debut, intercepted his pass for a dunk with 1:06 left to extend the Sixers’ lead to eight.

“I had an off night shooting-wise,” Porzingis said.

Kanter kept the Knicks within striking distance as he finished with 31 points and 22 rebounds, half of which were offensive boards. According to Elias Sports Bureau, Kanter joins Wilt Chamberlain, Bill Russell and Bob Lanier as the only players with a 30-20 game on Christmas.

“It’s always a good thing,” Kanter said, “but, I mean, people are texting my phone and saying congrats and whatever, I’m probably not going to text most of them back because who cares if I get 50 points, 50 rebounds? The state, the whole New York State, they want to see the playoffs… If my numbers aren’t gonna put us in the playoffs, it don’t mean anything.”

The Knicks dropped their second straight game because they did a poor job defending JJ Redick, who made four 3-pointers and scored 24 points. Also, backup point guard T.J. McConnell scored 15 points off the bench and made 5 of 11 shots.

Meanwhile, Michael Beasley failed to recapture the magic from last Thursday’s monster night against the Celtics. In fact, Beasley was called for a five-second violation with 66 second left. It was one of four turnovers the Knicks had in the last 2:15. And the Knicks’ three point guards — Jarrett Jack, Frank Ntilikina and Ron Baker — shot a combined 2-for-17 and scored four points.

Jack was responsible for the game’s hardest foul. Early in the second half, he was called for a Flagrant 1 after nailing Embiid with a flying hip check. Jack did the same thing to LeBron James last month with different results. Despite Jack recklessly jumping into him, James made the shot and Jack was simply called for a common foul. Embiid ended up on his back, but after a replay review he was rewarded when the referees upgraded the foul on Jack.

“I felt he wasn’t going for the ball,” Embiid said. “I felt he was going more for my body. I have to protect my body. I felt like it was a dirty play but I’m not worried about it. It’s basketball. I don’t have anything against him. But I thought it was a flagrant.”

The Sixers never trailed in the fourth quarter and after the Knicks tied it with 5:20 left, Philadelphia scored seven straight points to take control. The dagger was Embiid’s corner three that brought his teammates to their feet and sparked chants of “Trust the Process.”

“I thought the crowd was kinda quiet,” he said. “I heard it was always loud. But I love playing in this arena.”