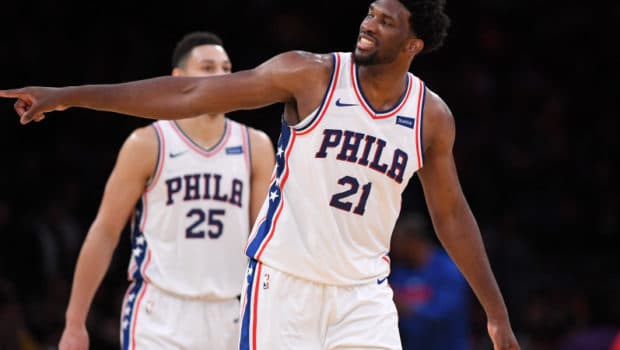 It rhymes with indeed, or friend in need.

The NBA has enough under-25 stars to fill up several red carpets. Maybe the league can loan Joel Embiid to the NFL, or some other distressed business that seeks a savior.

On Wednesday night, in a building that has celebrated two NBA championships, two Stanley Cups, Adele and Taylor Swift, Embiid stapled a new page in league history. He also punched a hole in the Lakers, or at least in their delusions that they’re anywhere close to catching up to the times.

Ordinarily you’d need a whole frontcourt to put together this numbers mosaic. Embiid, 23, had 46 points, 15 rebounds, seven blocked shots, seven assists and shot 14 for 20 for Philly, which held off the Lakers 115-109.

Nobody has ever gotten 46-15-7-7 before, and Embiid also hit three 3-pointers, including one that made it 7-2 and activated every other weapon he has.

He was a one-man battalion of drives from the wing, pump-and-go attacks from out front, outside shots, and post moves, including one rubber-band-man maneuver that seemed to take five minutes and drew oohs from the Sixers fans and resigned aahs from the Lakers crowd. If you saw it and thought Hakeem Olajuwon finally had a descendant, you were right.

“I had been watching a little bit of Hakeem and I thought I’d try that move, that duck-under, shimmy-shimmy,” Embiid said.

The Sixers are now 8-6 after losing 253 games in their previous four seasons. Much of that was intentional, but much of it was also due to Embiid’s inabiliity to overcome foot, back and knee injuries. He played 31 games last year and never on back-to-backs. In two games in three days at Staples Center, he turned in 70 minutes. The 76ers’ discretion has produced uncommon valor.

“I love Staples Center,” Embiid said, grinning. “I wanted to come in here and put on a show, which I did. I hadn’t been aggressive, and I didn’t do very well against Golden State and their team defense. The Clippers (on Monday) didn’t double-team me until late in the game. Tonight I wanted to attack from the beginning.