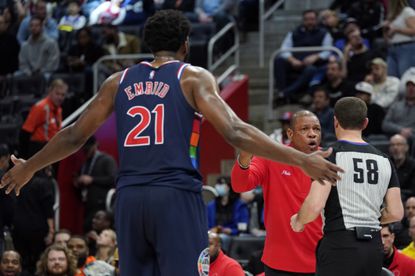 Joel Embiid rang up a 37-point, 15-rebound game over 37 minutes in the Sixers loss to the Pistons.

Embiid got whatever he wanted on offense, finishing 11-of-19 from the floor and 14-of-16 at the line, and he added three assists, one 3-pointer, one steal and two blocks while he was out there, but unfortunately, he also coughed up the ball seven times.

Turnovers were a major issue for Philly in the loss, and Embiid was responsible for close to half of them (15), so he’ll need to do a better job of taking care on Saturday vs. the Hornets for the 76ers to avoid a four-game skid.

defense to offense: a thread pic.twitter.com/Mjk2glH9sK